Manana Kochladze, Bankwatch’s regional coordinator for the Caucasus and co-author of our new civil society guide Gender and international financial institutions talks about the impacts on women’s lives when big money comes to help “develop” their countries. 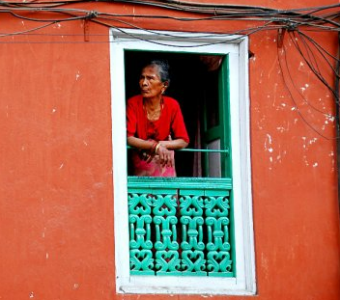 Five years ago, together with a few colleagues, I visited several Azeri and Georgian communities along the route of the Baku-Tbilisi-Ceyhan pipeline, an EBRD-sponsored project which, it was claimed, would contribute in significant ways to the development of localities along its route.

Previous experience had indicated that large extractive projects can potentially bring about a host of negative impacts on women and gender equality. Such effects are project-specific and can range from increased poverty and dependence on men to the proliferation of sexually transmitted diseases and sexual harassment and even to forced prostitution. At the same time, we had heard numerous statements from the (male) heads of international financial institutions (IFIs) such as the EBRD, who declared themselves committed to reduce or compensate negative effects on women’s lives – if not improving the women’s condition – through their projects. We were sceptical and decided to find our for ourselves: how does it work in practice?

Our field trip to Azerbaijan and Georgia proved to us that men in suits, sitting in offices in London or New York and approving financing for large extractive industries projects are wrong about the consequences of their decisions on women’s lives. We found that BTC has supported increased prostitution and trafficking along the route of the pipeline, has brought a number of health problems to some areas, and has worsened socio-economic conditions for some communities – making especially women’s lives more difficult.

The project promoters had promised employment opportunities: we found that job offers were fewer for women than for men and more often involved short-term, insecure contracts. They were in menial positions (cleaning, cooking) and they involved 12-15 hour work days. Given the scarcity of employment opportunities in the region, women reported that they simply put up with sexual harassment on the job, and in the rare cases when they did report, it was only after being fired. Moreover, the pipeline construction work and accumulation of male workers had increased rates of prostitution and trafficking and even of HIV and drug trade in some regions along the route.

Five years later, I have witnessed many more impacts on gender equality by individual investment projects. I have concluded that, even though the main international financial institutions are supposedly trying to mainstream gender issues in their policies, there is still too little systematic thinking about the real-life impacts of their projects.

Addressing gender inequality does not mean upholding women rights in theory. It means caring about the detailed and long-term consequences of the developments we choose to support. And large macroeconomic programs or infrastructure projects can have long-term negative impacts both on women and men, girls and boys, which in the end are problems of society as a whole.

Unfortunately, we cannot rely on bankers or politicians to address this. No matter what they declare. It is still the non-governmental organisations (NGOs), local groups, and women organisations, those closest to the impacts on the ground, who will lead this struggle. This is why, for them, together with a few colleagues, we have put together a gender toolkit (pdf) for monitoring projects sponsored by international financial institutions and for working to improve the gender practices of these organisations.

The toolkit (pdf) is based on experiences of different Bankwatch campaigners who have witnessed all kinds of problems caused by internationally sponsored projects. The toolkit is meant to support NGOs from the early steps of their engagement with IFI-sponsored projects. It gives hints about how to identify potential gender related problems and shows ways to prepare for the prevention or mitigation of such problems. It recognises the fact that different types of problems can be provoked by similar projects in diverse socio-cultural environments and takes it into consideration when proposing ways to really mainstream gender equality in our lives.