Criticism and protests around the World Water Forum have highlighted the risk of hydropower projects being greenwashed and the dangers these installations can pose to people and nature in many countries. 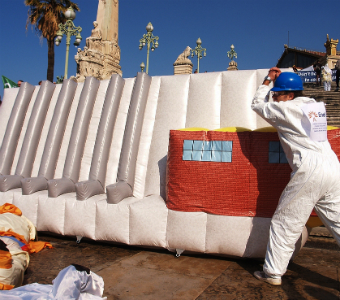 Last week’s World Water Forum in Marseille, “the world’s largest meeting around water”, has been widely criticised by non-governmental organisation, most fundamentally for basically selling out a human right to business interests.

Among others, the corporate influence on the meeting was reflected in a focus on technology and investments as a means to solve the global water, energy and food crises. One solution that’s being more and more often suggested are dams – lots of them, and large ones.

But NGOs have repeatedly stated the problems connected to large dams – displaced local communities, devastation of natural habitats (pdf), etc. – and have pointed at alternative solutions for instance to secure water supply.

To highlight these issues and to expose the ‘greenwashing of dams’ for which the World Water Forum has been a platform, our colleagues from International Rivers, Friends of the Earth France and CRBM, have staged a massive action in Marseille with protesters from across the globe. (You can read more on International Rivers’ blog and see images from the action on flickr.)

But not only large dams can be destructive:

While access to water is not part of the justification for these projects, “securing energy supply” is all the more being put forward as an argument.

Whatever the reasoning, whichever good is being provided in the end, the decisions on these and similar infrastructure projects should be based on a do-no-harm principal in order to protect local people’s rights and natural and cultural habitats. By no means should they be biased towards economic interests.

This is what the protests in Marseille tried to make clear.