As investors and officials are promoting a gas pipeline project from the Caspian Sea to Italy, the systematic repression of human rights in Azerbaijan is hardly on the official agenda. The Aliyev regime’s weakly veiled attempts to muzzle dissent illustrate how even the most repressive governments are acceptable partners for Europe’s pet energy projects. 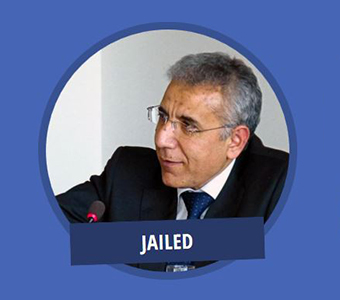 Today and tomorrow, the European Bank for Reconstruction and Development (EBRD) is hosting its annual meeting and business forum, where Europe’s pet energy project, the Southern Gas Corridor will surely be a hot topic.

The Southern Gas Corridor, a critical piece of the puzzle to import gas from Azerbaijan to Europe, includes three major pipelines — South Caucasus, Trans Anatolian (TANAP) and Trans Adriatic (TAP) — stretching 3500 kilometres from the shores of the Caspian Sea to southern Italy. The entire corridor is expected to require a total investment of more than 35 billion euros (45 billion dollars) and EBRD officials have publicly considered the possibility to lend to the mega project, while TAP, the last stretch of the pipeline, may receive support from the European Investment Bank.

Another piece is the Shah Deniz oil and gas field, the main source of power and wealth for Azerbaijan’s dictatorship. Located offshore in the Caspian Sea, Shah Deniz is envisaged to be the main provider for the Southern Gas Corridor.

In early July, shortly after the European Games in Azerbaijan will come to an end, the EBRD is expected to approve a 500 million dollar loan for none other than Russia’s Lukoil for its ten percent share in Shah Deniz. Another 500 million are expected to come from the Asian Development Bank.

Europe’s enthusiasm over Azerbaijan’s gas reserves and the mega-pipeline supposed to transport it do not only contradict the fact that Europe’s gas demand has fallen by 9 percent over the last decade. It also stands in stark contrast to the climate of repression in Azerbaijan and its condemnation by the international community, including the European Union.

After years of a deteriorating situation, the Azeri regime has become even more hard line with a crackdown on critics over the last few years. Right now 80 political prisoners are behind bars in Azerbaijan – more than in Russia and Belarus combined. 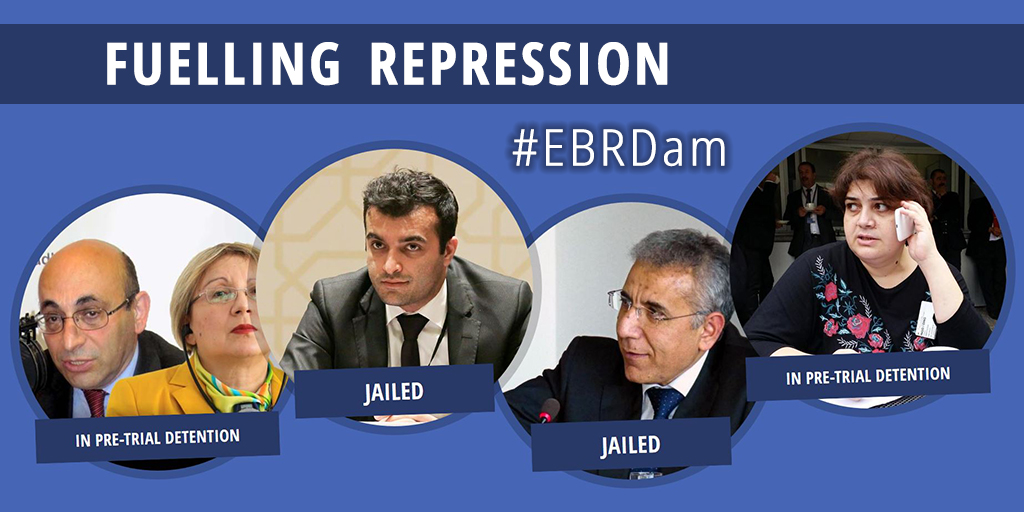 A Bankwatch interactive shows prominent examples of prosecuted human rights activists in Azerbaijan and invites you to send a message to the EBRD and European leaders.

Both sentences were condemned by human rights organisations and intergovernmental bodies like the Organization for Security and Co-operation in Europe (OSCE). Also the European Union criticised “procedural shortcomings” in Rasul’s case and the disproportionate sentence against Intigam Aliyev.

Not only were the arrests of Jafarov and Aliyev and other human rights defenders politically motivated. The flawed investigations and trials also clearly could not prove their guilt, with reportedly all prosecution witnesses testifying in favour of Rasul Jafarov and strong evidence presented against claims that Aliyev had not registered foreign grants.

In addition to prosecuting critics, the Azeri regime has introduced extremely restrictive and arbitrary rules for the registration and funding of civil society organisations in the country, making it impossible for many to continue their work.

Send messages via Twitter on #EBRDam to those following the EBRD’s annual meeting.

Many Azeris have spoken out about the negative impact fossil fuel extraction has had on their country – giving the dictatorship its money and power with much of the wealth being siphoned off into offshore accounts.

Rasul spoke about this shortly before his arrest. Referring to an earlier mega pipeline project that has equally been criticised, he said:

“Before the oil and gas incomes came to Azerbaijan we had more democracy and freedom. The main income from oil came in 2005 when the Baku-Tbilisi-Ceyhan pipeline started to operate. And from that time the situation started to deteriorate. We have problems with journalists being arrested, political prisoners, religious believers – if you criticise the government you can easily be interrogated and prosecuted under fabricated charges.”

In the face of challenges like these, the EBRD usually justifies its engagement by claiming it will have a positive „transition impact” by introducing social and environmental standards that are on par with international best practice. Yet, oil or gas infrastructure is rarely a guarantee of peace and security – rather on the contrary, as the example of the Baku-Tbilisi-Ceyhan (BTC) pipeline vividly shows.

The Oil Road is a forensic analysis of how poor farmers, hundreds of communities and entire nations have been forced to make room for BP’s BTC pipeline and, more widely, western energy imperialism with its attendant financial support structures.

From the beginning the BTC project, financed by the EBRD and other public lenders, was touted as a world class model development project and BP, the project sponsor, agreed to standards set by the OECD and the US and UK government’s principles on human rights (pdf).

Yet criticising the BTC pipeline was not tolerated in the three countries involved – Azerbaijan, Georgia and Turkey. While journalists were arrested in Azerbaijan, critics were intimidated, arrested and even tortured in Turkey, where villagers protecting their land were beaten and hospitalised by riot police.

In 2011, the UK government announced that the BTC Company had broken the commitments it had made to international human rights standards. Already in 2010, following a complaint to the U.S. government, the Overseas Private Investment Corporation, another project investor, recommended (pdf) that BP needed more precautions to safeguard the pipeline and “to comply with the applicable environmental and social policies and guidelines of the lenders […] and with national law.”

While billions are being poured into Azerbaijan’s fossil fuel sector, regime critics in the country can only expect repression at the hands of their own alleged representatives.

The European Union and its public lending institutions can apparently ignore this as long as they refer to a threadbare façade of “energy security”.

It is time to end this hypocrisy and to avoid mistakes that were made before by the same institutions and under the same premise.