As activists pointed out at a consultation meeting in Tbilisi, Georgia’s hydropower sector has plenty of lessons to be learned by the European Bank for Reconstruction and Development. 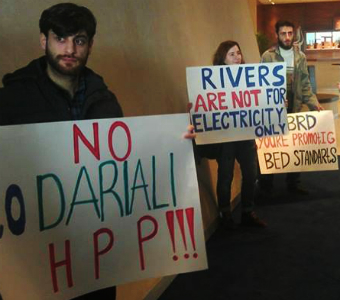 Yesterday in Tbilisi, during a public consultation on the good governance policies of the European Bank for Reconstruction and Development, an unexpected thing happened.

A Georgian activists movement staged a protest action against two potentially harmful hydropower projects, the Dariali and Shuakhevi HPPs, which had appeared in the EBRD’s project pipeline. The activists held banners asking the bank not to fund the two projects for they would destroy the gorges of Dariali and Adjaristskali. 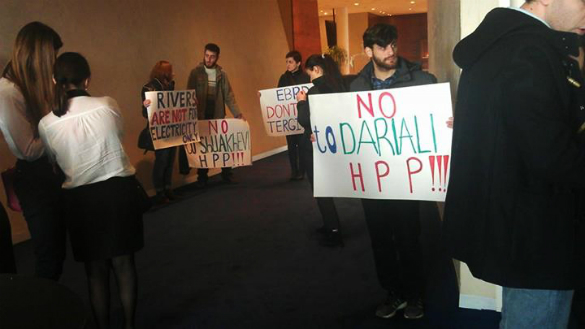 The activists specifically referred to the case of the Paravani hydropower plant (HPP) as a reminder for the bank’s management not to repeat the mistakes made earlier. The 87 MW Paravani HPP includes a 14 km derivation tunnel to divert water from the Paravani river to the Mtkvari river upstream of the village of Khertvisi. In some periods this would leave only 10 percent of water in the Paravani river – inadequate to ensure the survival of downstream flora and fauna – while at the same time, the project creates a significant risk of flooding Khertvisi.

Beyond exemplifying what can go wrong in small hydro projects in Georgia, the Paravani case also clearly illustrates the shortcomings of the EBRD policies that were under discussion yesterday. As Bankwatch reported in January, the EBRD’s Project Complaint Mechanism concluded (six months after we filed our complaint (pdf)) that three sections of the EBRD’s Environmental and Social Policy had been breached. The current review of the bank’s policies can be an important turning point to avoid similar debacles and strengthen independent control mechanisms.

Pleasantly EBRD staff agreed to listen to the activists’ concerns which were presented by one activist and which I summarise below these images from the action. 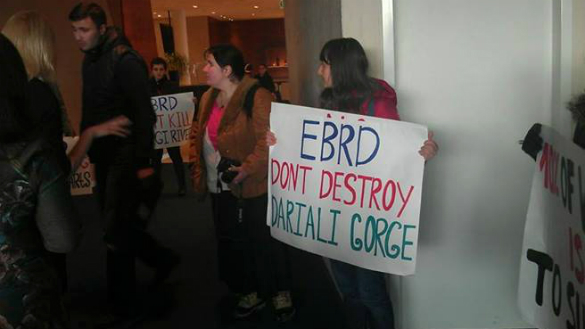 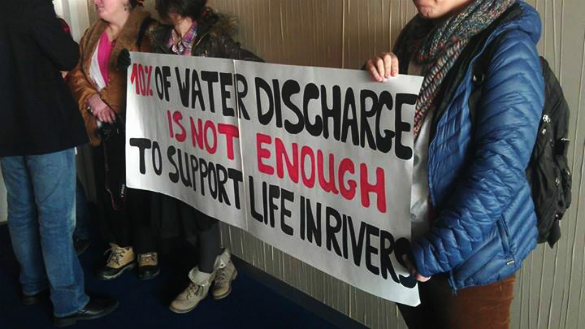 The Norwegian company “Clean Energy Invest” plans to construct a cascade of three HPPs on the Adjaristskali river in the Autonomous Republic of Adjara. The cascade includes the 185 MW Shuakhevi HPP, the 150 MW Koromkheti HPP and the 65 MW Khertvisi HPP. According to the project information of the EBRD, the Bank plans to fund the first HPP from the cascade Shuakhevi HPP.

The project includes the construction of a 22 metres high Skhalta Dam with a flooding area of 19 hectares) and the 39 metres high Didachara Dam (16.9 hectares) as well as three diversion tunnels. The project envisages leaving only 10 percent of the average annual water flow of the Adjaristskali river downstream from the dam.

The Dariali hydro power plant (HPP) project envisages the construction of a derivation type hydro power plant with an installed capacity of 110 MW on the river, in the Kazbegi municipality, close to the Russian-Georgian border.

The project would divert the greatest part of Tergi’s water, about 90 percent, leaving an approximate eight-kilometer section of the Tergi River without water. This would result in the landscape being radically changed on the eight-kilometer section of the Dariali gorge with a total length of 11 kilometers. As a result of the water diversion, the Gorge will additionally lose its historical cultural-ethnographic values and tourism importance.

In additional to causing environmental damage, the project would also harm the historical and cultural heritage as well as the local economy. The Tergi river was a source of inspiration for famous Georgian writers and poets like Ilia Chavchavadze, Alexander Kazbegi and Grigol Orbeliani. The river and its adjacent landscape are also attracting tourists, who would inevitably stay away, if the Dariali HPP project were implemented in its current form, resulting in adverse effects on the incomes of locals engaged in the tourism industry.