As the Georgian government moves ahead with its plans for increasing the country’s hydropower capacity, local communities are being sidelined in the process of compensation payments. 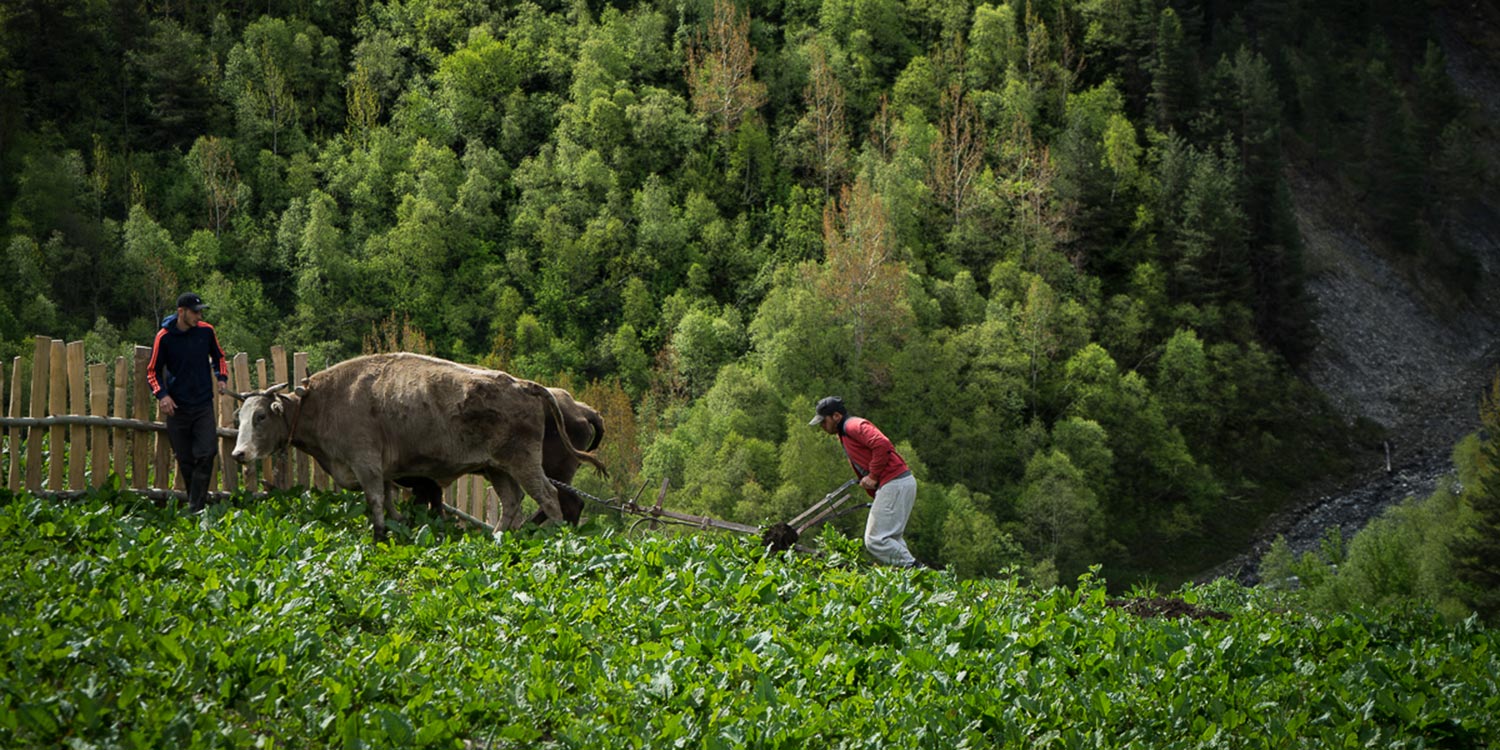 Locals working on their land in Upper Svaneti to produce their food. (Image (c) Rosa Vroom)

This article first appeared on openDemocracy.

Earlier this summer, I visited Georgia’s Svaneti region together with colleagues from Bankwatch. Svaneti, located high in the Caucasian mountains, borders the breakaway territory of Abkhazia, and is home to some of the most pristine rivers in the Caucasus. As a team of civil society members, we travelled there to talk with local people and analyse the quality of consultations over future development projects on their lands.

Together with the surrounding forests, Svaneti’s Nenskra and Nakra rivers have existed in a symbiotic bond with local communities for centuries. This strong interdependence between people and nature is visible everywhere in Svaneti — a constant reminder of the important role that local communities must play in designing infrastructure projects.

Yet in recent years, Svaneti has been transformed into a battleground between communities and the Georgian government with its plans for building large hydro power plants. The threat has united Svan people who are struggling to conserve what is left of their cultural heritage and the biodiversity of the region.

The Georgian government’s ambition to build dozens of new hydro power plants (HPPs) in the Svaneti region has caught the attention of international financiers. The European Bank for Reconstruction and Development (EBRD), the European Investment Bank (EIB), the Asian Development Bank (ADB) and the new Asian Infrastructure Investment Bank (AIIB) have all expressed interest in financing the planned 280MW Nenskra HPP, the most advanced project in the government’s pipeline. Up to 75% of the project costs could come from international public sources and with the loan approval date coming up on 15 November for the EBRD, there is little time to act.

But while the dam is supposed to ensure energy security for Georgia during winter and eliminate imports from Turkey, locals and activists are opposing the project, which they view as a threat to Svan culture, the biodiversity of the region and the safety of local communities given the area’s seismic instability.

Seeing the awe-inspiring Svaneti region, the forests and rivers that will vanish for the Nenskra HPP, it is easy to understand these concerns, the anger and the feeling of hopelessness that locals express. Capturing water from these two serene rivers, the impacts of the project would stretch for dozens of kilometres, from the transmission lines to the power house, the site of the dam and over and across the mountains along the future water intake tunnel from the Nakra river. If the dam plans are implemented, it will get Nakra river down to 10% of its current flow and Nenskra to 5%. The project will affect numerous pasture lands and summer grazing areas for animals and its reservoir will flood hectares of forest.

A biodiversity expertise commissioned by Bankwatch identified several species of wild protected animals in the region including Eurasian lynx, brown bear, Persian leopard, booted eagle among many whose habitats will be disturbed by the future dam. Moreover, the region is experiencing annual mudflows and landslides and is well known for its geological instability, something people fear might be emphasized when the dam is built. Locals have also expressed great concerns over the impact the the dam will have on the humidity levels in the villages, causing numerous health problems as was the case of the Enguri HPP built in the region during soviet times.

The project promoter is JSC Nenskra, a Georgian company established by Korean K-Water with a 10% share of a Georgian state owned company. JSC Nenskra has already benefitted from several deals with the Georgian government, among others receiving forest land for one dollar contracts (see page 20). The locals we spoke to and who have used this land for centuries told us they were not even aware of the deal.

JSC Nenskra has committed to compensating the rightful owners for all pasture land and assets that will be lost due to the project. But during our visit and discussions with affected people, we discovered major flaws in the company’s assessment of the number of people that will be affected, their assets as well as the compensation they are entitled to. The shortcomings, which we have collected in a report, are proof and consequence of a lack of proper consultations with local communities.

The majority of people living in the two valleys own cattle that graze on summer pastures, lands which are inherited since generations and co-owned by up to five families. Customary law still dominates the region and people share both pasture and other assets such as summer cabins. During our discussions with affected households, we discovered that the project developer failed to map all the rightful users of these lands and assets. Instead, the company included single users in the compensation scheme, thus leaving behind numerous other co-users. This is the case for all the households we interviewed and from the assessment of the project documentation it seems it has been the practice for all the pasture lands that will be lost. In addition, a number of individual owners of land and cabins from the Nakra valley have been completely left out of the compensations scheme.

These systemic gaps in how JSC Nenskra assessed people’s land rights reveals not only the poor quality of public consultations, but also a patronising perception of local culture and livelihoods. Our visits to the region have left no doubt that the company has failed to recognise locals’ dependence on their land and the way their communities are functioning, based on strong internal rules of sharing and inheritance.

The poor quality of consultations is also reflected in the unjust amounts of compensation. As detailed in our report, the project documentation does not thoroughly assess the economic situation of affected households. The company’s assessment does not take into consideration the number of cattle that a family owns and which of these families would lose access to pasture and therefore to fodder. It also does not account for the numerous internally displaced people in the communities, or acknowledges the impact of changes in logging activities. In sum, the company has overlooked major aspects of the socio-economic profile of locals which are crucial for a just compensation scheme.

Moreover, the company is still delaying an assessment of the impacts of facilities associated with the hydropower plant such as transmission lines and a waste disposal site. Needless to say that also the consultations with affected communities has not happened yet.

While the project documents made available by JSC Nenskra do not contain information on the location of these associated facilities, cadastral plans obtained from the Georgian authorities show that the location has already been agreed on. Local residents, who have signed letters demanding to be consulted about the locations of these facilities and the compensation they are entitled to, are understandably outraged.

Many still fear to speak out about the project and have asked for confidentiality during our interviews, afraid there might be repercussions on their families or jobs. A change in the logging licence system from 2015 has restricted the possibility for locals to obtain licences, forcing many into the illegal logging and timber sales business.

But the threat of losing parts of their identity along with the development of the project drove more than 300 people to sign a letter this June expressing their opposition to the project and their disappointment with the company’s failure to take account of customary law and local culture. And some are still taking the risk of openly opposing the project — in August, Bankwatch witnessed a large group of locals stepping out from the last round of public consultations held by the company.

Assessments of expropriation and compensation are not the residents’ own ideas, but international standards that JSC Nenskra has to respect to receive international public finance. Yet countless breaches of these standards are evidence that the Nenskra hydropower project is a serious threat to the local Svan communities.

If realised, this project will strip over 200 people, some of whom already living in poverty, of their pasture lands and livelihoods. The project must not go ahead until the project company is conducting individual assessments in order to have a full picture of the socio-economic situation and the fair amounts of compensations.

Multilateral development banks have so far delayed their approval date for loans for the Nenskra project in light of the numerous environmental and social concerns. With Georgia’s hydropower sector marked by controversies and major errors in the past, international investment ought to tread more carefully with approving any more projects.

When banks’ clients lack the capacity and willingness to understand the contexts in which they operate, the irreversible disruption of the fabric of entire communities is inevitable.