Home > Blog entry > Guest post: Behind the glitz of oil riches – the shrinking space for democracy in Azerbaijan

Last week, the European Bank for Reconstruction and Development approved a loan over half a billion dollars for Lukoil’s share in the Shah Deniz gas field in Azerbaijan. In this guest post, rights activist Emma Hughes from Platform reflects on how business as usual resumes after the media attention on Azerbaijan’s human rights abuses has faded. 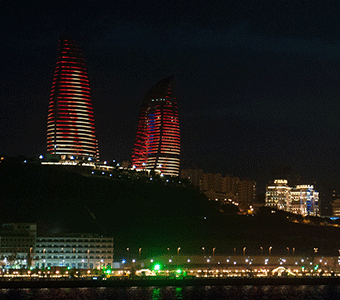 International sporting competitions can fix the beam of world attention on countries and places otherwise ignored. Especially when that competition is the Olympics – but the spotlight is usually fleeting and when the athletes leave so does the glare of media scrutiny.

This has been the case in Azerbaijan who hosted the inaugural European Games this June. Even before the Games began the ruling Aliyev regime proved they were not going to tolerate critical voices. They banned journalists and human rights organisations from entering the country – including the Guardian, Amnesty International and the oil watchdog Platform. It wasn’t Azerbaijan’s athletes that were getting media attention but Azerbaijan’s activists – people like Rasul Jafarov – one of the creative forces behind the Sport for Rights campaign. This highlighted the numbers of political prisoners in Azeri jails and, in turn, saw Rasul himself jailed for six and a half years.

For many years I have followed the situation in Azerbaijan, getting to know some of the people who have been imprisoned. And I have seen how systemic and brutal the regime’s crackdown has been, as dozens of Azerbaijani journalists and activists were arrested in quick succession, forcing many more to flee the country or go into hiding.

Civil society in Azerbaijan has been stamped on hard leaving a vacuum where a democratic culture should be. Azerbaijan has a strong history of democracy. It was one of the first countries to introduce universal suffrage in 1918 – a full ten years before the UK did. Yet in the intervening years this culture has been destroyed, first through Soviet rule and then by the Aliyev dynasty. After signing a contract with eleven international oil companies in 1994 to exploit the oil resources of the Caspian sea, the Aliyev family have been reliant on hydrocarbon revenues to secure their rule. It is oil and gas revenues which have provided the Aliyevs with the finance needed to pay security forces and establish a secure income base (meaning they don’t have to listen to citizens voices because they are not reliant on those citizens for a tax base).

The crackdown in Azerbaijan intensified in the year before the Games, but it really began in 2013 during the country’s Presidential elections. The regime beat and arrested opposition candidates and the growing youth movements who were demanding change. Real debate was shut down and the pervading atmosphere of fear meant free and fair elections were impossible.

The day before the polls opened a government mobile phone app accidentally ‘leaked’ the results. The official excuse was that the results were from the previous election but given that they listed the current candidates it wasn’t too convincing. On the day there was evidence of ballot box stuffing and carousal voting (where people get driven around to different polling booths to vote many times over). The OSCE/ODIHR Election Observation Mission concluded: “Significant problems were observed throughout all stages of election day processes and underscored the serious nature of the shortcomings that need to be addressed in order for Azerbaijan to fully meet its OSCE commitments for genuine and democratic elections.”

While many people will have heard about Azerbaijan as a repressive country hardly any will have learnt about the country’s democratic history. It was not inevitable that Azerbaijan would become a petro-state. Baku was the world’s largest oil producer in 1990, and the region was the focus of Soviet oil production from 1917 to the Nazi invasion in 1941. However, the USSR shifted exploration to western Siberian reserves and output declined rapidly into the 1990s.

When the Aliyevs came to power, they made the choice to place oil at the heart of the country’s economy and were encouraged to do so by western international oil companies. This choice has harmed the people and landscape of Azerbaijan: fostering inequality and corruption, strangling democracy and enabling the abuse of human rights.

As the glare of media attention fades it’s the resumption of business as usual in Azerbaijan. Last week the European Bank for Reconstruction and Development approved a loan to Russian company Lukoil to develop the Shah Deniz gas field off the coast of Azerbaijan. The bank’s establishing agreement states that they will only lend to “countries committed to and applying the principles of multiparty democracy”. Yet they agreed to lend to a country where neither a system or a culture of democracy exists. Azerbaijani and European civil society groups sent a letter (pdf) to the Bank’s President highlighting how the loan to Lukoil will squeeze the space for civil society, as the regime is entrenched even further.

It is this continued European support for the Aliyevs and the hydrocarbon extraction that props them up which moves Azerbaijan ever further from a democratic transition.