New cases of arbitrary repression against civil society happened in the run-up to the presidential elections in Egypt. A look at the loans so far approved by the European Bank for Reconstruction and Development suggests that those in power have been more successful in receiving the bank’s support. 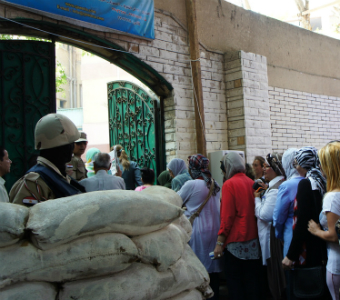 Last Thursday an office of the Egyptian Center for Economic and Social Rights (ECESR) has been raided by military forces just days ahead of the presidential elections in Egypt that are coming to a close today. In a joint statement Egyptian and international organizations condemned the raid as “reflect[ing] a repressive atmosphere, and rising threats to the existence and function[ing] of civil society organizations”.

It was the second raid on ECESR offices under the current military regime and only the most recent incident to suppress opposition. One of the reasons ECESR has been targeted may be a recent success in front of the Administrative Court. The ruling allows ECESR to appeal against amendments to an investment law that stipulate that no third party may challenge the validity of agreements made between the Egyptian government and investors – a practice that would mock transparency standards and increase the risks of corruption.

The investment law is just one of the many democratic shortcomings of the Egyptian regime. Since the military took control in July 2013 hundreds of people have been killed, imprisoned and tortured for holding on to believes that the Egyptian military did not approve of. Activists and protesters, not only from the Muslim Brotherhood have been persecuted and politically marginalised. The most striking example of the repression has been a court ruling sentencing over 529 Muslim Brotherhood members to death.

Throughout this time, with no functioning parliament in the country, the European Bank for Reconstruction and Development continued its lending in Egypt even though its mandate restricts its operations to countries that apply the principles of multiparty democracy and pluralism.

A February briefing (pdf) by Platform London based on a six-month mission to Egypt illustrates the conflict between the country’s political situation and the EBRD’s mandate:

“The regime in Egypt has been implementing policies inconsistent with the EBRD’s purpose, in particular with the political aspects of its mandate. […] Since the military takeover in July 2013, progress has been negative on most factors defined by the EBRD as ‘essential elements of multiparty democracy and pluralism’.”

The briefing further details that the situation has become significantly worse in relation to 11 out of 14 of these elements (pdf), including those concerning the rule of law, the separation of powers, free elections, freedom of speech and freedom of organisation.

“The current atmosphere of systematic torture, persecution and censorship of any public critics of the military and the military-appointed government highlights clear non-compliance with the EBRD’s political mandate.”

Support for oil and multinationals, bypassing the people of Egypt

Since the beginning of its operations in Egypt, the Board of Directors of the EBRD which represents the Bank’s shareholders, has approved 9 loans worth up to USD 756 million.

Platform’s examination of the loans[*] shows the bank’s failure to channel its money to where it is mostly needed in a country ridden by widespread poverty and unemployment.

Equally problematic is the EBRD’s support institutions that are under the regime’s control: the public Egyptian Electricity Holding Company and Egyptian National Railways receive almost half of the EBRD’s support (362 million) and the state-owned National Bank of Egypt an additional USD 100 million.

All three loans have been approved by the EBRD after summer 2013 – at a time when severe and repeated human rights violations were being committed by the military regime.

Faced with such criticism, the EBRD regularly claims it is ‘closely monitoring’ the situation on the ground. If that is so, should the bank’s not only continued but intensified operations in Egypt be understood as approval of the regime’s conduct? Is the killing of hundreds an unfortunate but necessary side-effect of transition to a market economy? Does ensuring the supply of mid- to up-market ice cream somehow outweigh the collective death sentence for 529 oppositionists on the second day of trial?

* Since the briefing was prepared in February this year, the numbers have been updated for this blog post. The loan for Kuweit Energy that is included in our numbers, is not featured in the EBRD’s list of projects in Egypt because it covers also activities in Ukraine.