Hidden behind a financial intermediary, the EIB has supported the destruction of the Mojanska River in Montenegro. Yet local inspectors claim nothing is wrong. Will the EIB now take corrective action? 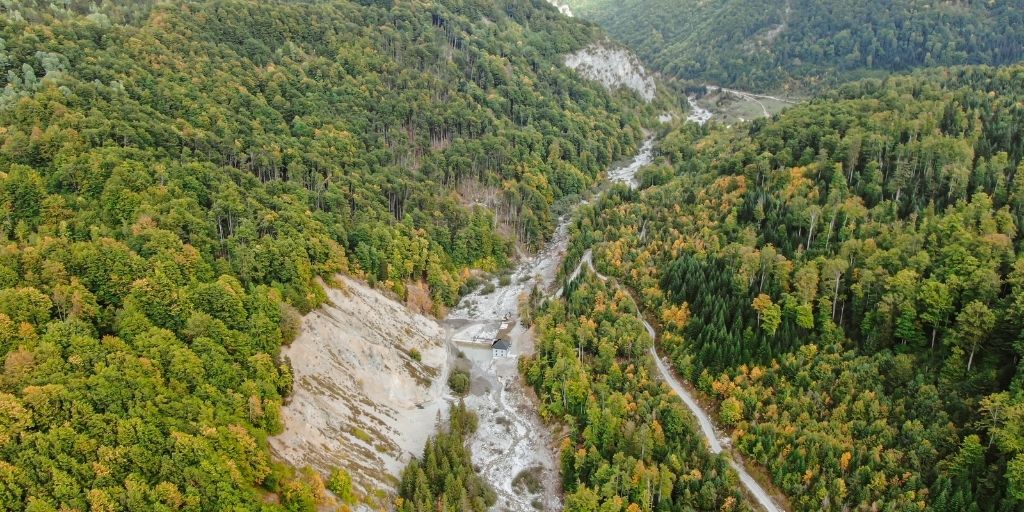 When the loan for construction of three small hydropower plants on the Mojanska River was signed in 2019, the Komovi Regional Park was already four years old.

Yet there is only one single sentence in the environmental impact assessments (EIAs) of Mojanska 1 and Mojanska 2 plants admitting that the plants are ‘located within the boundaries of the regional nature park’.

The only thing that follows is: ‘Therefore, it is necessary to apply all measures to protect all segments of the environment’. There is no explanation about the Park’s management regimes and no reference to the fact that part of the cascade is in zone 2 of the Park where only traditional and temporary construction is allowed. For Mojanska 3, the plant that was constructed deepest in the Park, an EIA was not even carried out because it is less than 1 MW, and an EIA was automatically not required according to the national legislation. EU law, on the other hand, at least requires such projects to be screened to check whether they need an EIA.

The hydropower cascade is financed by the European Investment Bank (EIB) – not directly but via the Investment and Development Fund of Montenegro (IDF). A third of the EIB’s lending is hidden behind such financial intermediaries. The fact that the EIB leaves project appraisal to the intermediaries means that environmental assessments are often not done properly, if at all. A lack of monitoring during construction and operation is also more than common for such investments.

In 2020, the first year of operation of the Mojanska plants, the riverbed was left dry, leading to irreversible impacts to fish and other aquatic fauna. In a statement at the time, WWF Adria commented that: “It is very uncertain whether anything from the living world can survive. It is of special importance to point out that the Mojanska river has been declared a protected fishing area, as an area of the greatest importance for the spawning of brown trout. This means that this river was a natural breeding ground for trout before the construction of the small hydropower plants, while now the river is permanently damaged and it is most likely that this species will completely disappear in it“.

Our field visit on 1 October 2021 proved more of the same. The three plants, Mojanska 1, Mojanska 2 and Mojanska 3, had barely left any water in the river and completely block fish migration. The valley now looks more like an industrial site than a protected area.

Fish pass more suitable for kangaroos than for fish

According to the Montenegrin law that was in force when the Mojanska plants obtained their ‘water conditions’ permits, leaving only 10 percent of the annual average water flow in the river should be enough to support wildlife, whilst installing anything that the investor calls a ‘fish passage’ was considered enough to ensure fish migration. Doesn’t matter that the ones constructed on the Mojanska river are more suitable for kangaroos than for fish – the stairs are too steep and they would have to jump from stone to stone in order to get to the other side of the dam. Moreover the small amount of water in the river would make it unlikely that fish would even reach the beginning of the fish pass.

But even the best fish passages in the world cannot prevent negative impacts on aquatic animals. Numerous scientific studies show that more than half of fish cannot manage to use the fish passages, especially for species other than trout and salmon. In addition, every fish passage needs monitoring to ensure that it is operating as planned, and obstructions such as driftwood are regularly removed. Such regular monitoring is impossible in remote areas, and there is no incentive for the operator to ensure the fish pass is functional, as every litre of water in the fish passage means less income. Even if a fish passage is moderately functional, it does not replace lost habitat. For almost its entire length the Mojanska river now receives 10 percent of the water it used to have before the plants were built.

The Analysis of Impacts chapter further illustrates the poor quality of the EIAs. The otter (Lutra lutra) is the only animal for which actual fieldwork was carried out – one day for Mojanska 1 and one for Mojanska 2. Two fieldwork days for a cascade that costs EUR 5.9 million.

The conclusions completely ignore the fact that 90 percent less water in the river would mean less fish for the otter: “During the exploitation phase, the planned projects for the construction of SHPP Mojanska 1 will not have any special negative impact on otters, since the project envisages the construction of fish passages, which will enable the migration of fish.”

Inspectorate visits only after heavy rains

Immediately after our visit in October, WWF Adria’s partner in Montenegro, NGO Eco-Team, notified the national authorities and an environmental inspector visited the plants shortly after heavy rains. Unsurprisingly, on 12 October the inspectorate reported that:

It is not clear whether it was a coincidence that the inspectorate visited only a week after being notified and only after heavy rain, but this clearly weakens the inspection’s effectiveness. Such scenarios are played out time and again across the whole of southeast Europe, preventing the worst impacts from careless construction of small hydropower from being mitigated.

EIB environmental and transparency standards on intermediaries must be tightened

As with other small hydropower projects from Bulgaria, Serbia and Croatia, the financing of the plants via intermediaries meant that the public could not bring their concerns to the EIB before the damage was done, because they did not know it was involved. The EIB’s involvement in Mojanska was revealed to the public only in March 2020, after several information requests and a complaint to the EIB’s Complaint Mechanism by Bankwatch.

This case illustrates the inadequacy of the EIB’s environmental standards for intermediated projects. Neither the national authorities nor the Investment and Development Fund of Montenegro are equipped to ensure project assessment and operation in line with EU law – a situation worsened by Montenegro’s entrenched corruption, as highlighted by the US Special Representative for the Western Balkans last week.

The Mojanska River is not only located in a regional nature park, but also in an Emerald network site under the Bern Convention and a proposed Natura 2000 site under the EU Habitats Directive. There is probably not a single fish or otter left in the river, but the Montenegrin inspectorate can find nothing wrong. A project like this would never have been approved in EU member states.

The new EIB standards on Financial Intermediaries and Biodiversity proposed in summer 2021 unfortunately do not improve the transparency, due diligence and monitoring of projects like Mojanska. This must be changed if the Bank is to avoid causing more damage to rivers. The EIB also needs to introduce the concept of no-go areas for financing, such as national and natural parks, areas with many endemic species, free-flowing rivers, Emerald  sites under the Bern Convention, proposed or actual Natura 2000 sites and pristine forests.