A documentary exposes the practices and disastrous local impacts of oil extraction by European energy companies in Nigeria. Food for thought for ourselves and our political representatives at national and European level. 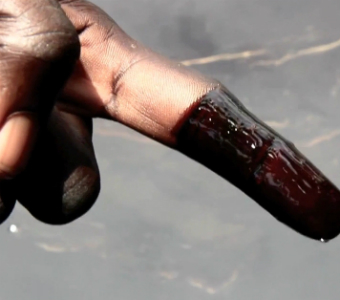 Europe’s actions in the Global South are, to say the least, ambiguous, and even more so when it comes to energy. On the one hand there is for example Commissioner for Development Andris Piebalgs promoting access to sustainable energy for “the poorest people on the planet” as part of the EU’s development cooperation. On the other hand there are European energy corporations extracting fuels with devastating impacts on the local population and environment.

Vivid proof for the latter gives a documentary filmed in the Niger Delta by film-maker Luca Tommasini: the 20-minute video exposes the devastating consequences that oil extraction by European energy corporations has on the lives of Nigerians and the environment. (The film has been produced by Bankwatch and three partner NGOs – Campagna per la Riforma della Banca Mondiale (Italy), Les Amis de la Terre (France) and urgewald (Germany).)

The documentary makes it clear that we Europeans are not innocent of the suffering of the people in the Niger Delta: Not only is it European corporations that extract Nigerian oil in a ruthless manner, disregarding Nigerian legislation and their own corporate rules of conduct. It is also the choices Europe makes to secure supply for our ever-increasing hunger for energy – no matter the costs for locals and nature.

One blatant example of the ruthlessness of oil companies depicted in the film is the continued use of gas flaring by Italian ENI in spite of the practice being made illegal in Nigeria because of the enormous health and environmental negative consequences. The company brazenly claims on its website (last accessed Feb 8, 2012) to have halted the practice in places where it hasn’t. (There are more details on ENI’s gas flaring in the Niger Delta in the report The reality behind EU “energy security” the case of Nigeria (pdf) that has been prepared following a fact finding mission to Nigeria last year.)

Tommasini’s documentary brings European audiences face to face with the consequences of their consumption practices and the rhetoric of their political representatives: with every unnecessary purchase, with every flight, with our constant quest for a more comfortable lifestyle we justify our governments to do anything in the quest for “European energy security”, including abetting our corporations to drill further for dirty oil, while destroying lives in Nigeria and elsewhere.

So what to learn from this?

Even if we all applied more considerate consumption patterns forthwith (which we should), it won’t suffice without seriously rethinking the European Union’s so-called „energy security strategy”. In spite of the imperative to shift away from fossil fuels as soon as possible to avoid dangerous climate change, the EU as the world’s largest energy importer plans to keep them in the energy mix for decades to come.

“The EU’s ‘energy security’ policy is not only killing Nigerians: in the long term, it is jeopardising everyone.”