Home > Blog entry > Public in Bosnia-Herzegovina to pay for shaky economics of Tuzla 7 coal plant, but will officials take heed?

After several years of developments related to a seventh unit at the Tuzla power plant in Bosnia and Herzegovina, the public is now able to understand the plant’s economics, thanks to a document published in the run-up to a debate in the Federation of BiH parliament this week. It might have been a better idea to have this debate earlier, considering that the news is not exactly good for the project developer, Elektroprivreda BiH (EPBiH). 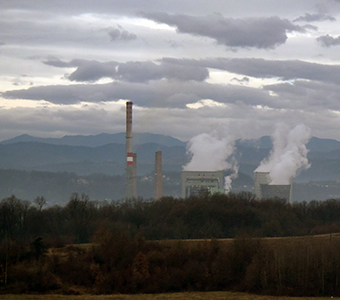 After several years of developments related to a seventh unit at the Tuzla power plant in Bosnia and Herzegovina, the public is now able to understand the plant’s economics, thanks to a document published in the run-up to a debate in the Federation of BiH parliament this week. It might have been a better idea to have this debate earlier, considering that the news is not exactly good for the project developer, Elektroprivreda BiH (EPBiH).

In April, China’s Gezhouba was the only one of two shortlisted bidders to submit a final offer for the 450 MW lignite unit, with Japan’s Mitsubishi Hitachi Power System having been put off by the political situation in Bosnia and Herzegovina and reportedly also the plant’s unprofitability. But only now have concrete figures emerged that allow a closer examination of the situation.

Now the details: Gezhouba offered two options, one that uses a credit arrangement known as a Preferred Buyer’s Credit, at a cost of EUR 785.7 million, and one using a Buyer’s Credit, at a cost of EUR 835 million. Elektroprivreda BiH considers the first option economically viable, with a Net Present Value (NPV) of EUR 54.644 million over 25 years and an Internal Rate of Return (IRR) of 11.63 percent. The second is considered unviable, with a negative NPV and an IRR of only around two percent. In summary, EPBiH goes for the Preferred Buyer’s Credit.

But while the difference between EUR 785.7 and 835 million might sound like a lot, in the world of building coal power stations, it’s nothing.

The most drastic example from this region is the lignite unit at Sostanj 6 in Slovenia, whose costs doubled from EUR 700 million in 2007 to an estimated EUR 1.44 billion. The kanalysis by EPBiH document does take a look at coal plant prices from around the region in order to assess whether Gezhouba’s offer is reasonable, but it too easily dismisses Sostanj as incomparable and brushes over the problems it has suffered from, as if they could not happen in Tuzla.

Even projects with less dramatic price increases show a tendency to pile on a few tens of millions of euros during development. For example the price of Plomin C in Croatia was set at EUR 800 million for at least the last three years, but in May costs suddenly jumped to EUR 827 million before a preferred bidder had even been chosen.

If Tuzla 7 picks up EUR 50 million more in costs along the way – which is far from unlikely – it will be economically unviable. Similarly it won’t be good economics if the costs of coal or electricity prices used in the calculations turn out to be wrong.

EPBiH is aware of the second problem, having mentioned that electricity prices in the EU are currently lower than the expected sale price for Tuzla 7’s electricity at EUR 56.75/MWh. The expected price of lignite from nearby mines is just under EUR 2.4/GJ (4.75 KM), but if the real price is higher, ‘the competitiveness of the existing generation and feasibility of building new units will be threatened’, says EPBiH’s document.

So rather than coming to the same conclusion as most utilities in Europe – that it is a really bad idea to invest in coal – EPBiH has merely re-stated its commitment to constructing Tuzla 7 and is crossing its fingers that before unit 7 comes online electricity prices will rise above 56.75 EUR/MWh.

In order to be sure about the price, the document mentions EPBiH signing a long-term power purchase agreement with the project company to increase the stability of the investment. However, there is a risk that such an agreement would be in conflict with Bosnia and Herzegovina’s obligations under the Energy Community Treaty, which does not allow state aid.

In the end, we’re back to where we started, with a proposed coal plant that may or may not be feasible, nobody really knows. Will Bosnia and Herzegovina’s elected officials realise that this foundation is too shaky for such a large project, or will we soon have another Sostanj 6 on our hands?