Despite an urgent need to rebuild and reshape its highly inefficient and outdated energy sector, Ukraine has recently presented a draft of its new energy strategy that looks more like of the same. While the strategy makes mention of modern renewable en 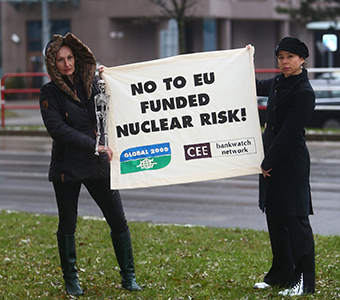 Protest action during the visit of EU commissioner for the Energy Union Maroš Šefčovič to the Central European Energy Conference in Bratislava, September 2016.

Despite an urgent need to rebuild and reshape its highly inefficient and outdated energy sector, Ukraine has recently presented a draft of its new energy strategy that looks more like of the same. While the strategy makes mention of modern renewable energy sources, targets for these are low, and nuclear energy still maintains its leading position in the mix. The country’s 15 Soviet-era reactors are expected to bridge the gap in the so-called energy transition until 2035, meaning that they would need to operate twenty years beyond their designed lifetime, posing a threat to neighbouring countries in Europe and beyond.

The draft energy strategy released by Ukraine for consultations in January does not plan for the active development of renewables until 2025, with its share of the energy mix reaching 20 per cent by 2035. According to estimates by Bankwatch member in Kyiv the National Ecological Centre of Ukraine, the potential share of renewables by 2035 should be at least 60 per cent, in order to ensure that the long-term goals of the Paris Agreement are met. To reach this amount, the active development of renewables, distribution networks and energy storage systems should begin now. Yet instead of moving in this direction, Ukraine looks set to extend the lifetime of another aged reactor – unit three at the Zaporizhia nuclear power plant – whose licence expires after 30 years operations in February.

The shortcomings facing clean energy in the draft strategy should be no surprise, given that Ukraine has refused for the past five years to conduct a thorough environmental impact assessment (EIA) of its decisions to prolong its nuclear units. Such an assessment would provide an opportunity to discuss alternative energy scenarios, and would benefit from feedback after consultations with neighbouring countries and other EU member states, where solutions to phase out nuclear energy are being sought.

The threats presented by an absence of renewables in the draft energy strategy, along with a thorough EIA for Ukraine’s nuke extension, are compounded by the fact the safety upgrade measures meant to improve the conditions of these reactors are not being fully implemented by Ukrainian authorities. These measures are partially funded by European taxpayers via the EBRD and Euratom.

Fortunately these worrying decisions are not passing unnoticed, as international bodies have sounded alarms. In November 2016, the implementation committee of the Espoo convention on transboundary impact assessment opened an investigation into the extension of five Ukrainian reactors (South Ukraine 1 and 2, Zaporizhia 1 and 2, Khmelnitsky – point 3 in the pdf). Moreover, the Secretariat of the Energy Community has opened an infringement procedure against Ukraine for its failure to comply with the provisions of the Energy Community Treaty, specifically for not transposing the EU’s EIA directive. Such developments are indictment of Ukraine and its inability to develop sustainably its energy sector in line with its neighbours in Europe.

The draft energy strategy is a far cry from the progress in the sector expected by the European Commission and financiers as a condition of their lending programmes. The EBRD and Euratom, supporters of the nuclear safety upgrade program in Ukraine, should be alarmed by provisions in the draft strategy to keep units running for another 50 years, a timespan never once envisioned for the VVER-type nuclear unit. As such the EBRD and Euratom should suspend their financial assistance until Ukraine complies with its international obligations.