The Western Balkans countries have strong electricity export ambitions that create the danger of stranded assets, finds a new report launched by CEE Bankwatch Network today. If governments take electricity expansion decisions without taking due account of developments in other countries, the region will have to compete with other nearby exporters and may find that its power plants become uneconomic. 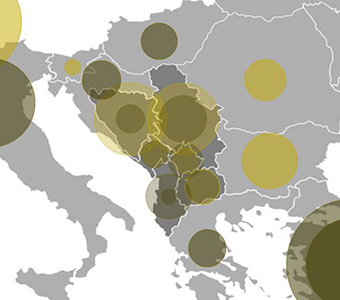 The Western Balkans countries [1] have strong electricity export ambitions that create the danger of stranded assets, finds a new report launched by CEE Bankwatch Network today. If governments take electricity expansion decisions without taking due account of developments in other countries, the region will have to compete with other nearby exporters and may find that its power plants become uneconomic.

The study was carried out for CEE Bankwatch Network by the University of Groningen and the consultancy ‘The Advisory House’ and it can be found at
https://bankwatch.org/sites/default/files/WBalkans-stranded-assets.pdf

The complete dataset can be downloaded at
https://bankwatch.org/sites/default/files/WBalkans-stranded-assets-dataset.xls

It analyses the electricity supply and demand patterns of countries in the Western Balkans for the next ten years and examines their export prospects. The results show that if the countries realize their planned capacity extensions, the region will have a 56% electricity surplus in 2024, suggesting significant export ambitions.

In particular Bosnia and Herzegovina could turn into the largest exporter of electricity (up to 20 000 GWh), followed by Serbia (18 000 GWh). The other countries have a much lower potential contribution [2] to the regional surplus, but measured in terms of their domestic demand, their export potential is substantial.

Such significant electricity capacity expansions designed to meet export demand create the danger of becoming dependent upon the export market. The export analysis shows that there will not only be competition within the Western Balkans (in particular between Serbia and Bosnia and Herzegovina) but also from other nearby competitors such Bulgaria, Romania and the rest of the EU. Given an expected excess supply in Europe, increased competition may put pressure on export prices and increase the risk of incurring stranded assets – power plants that will become simply uneconomic to even operate. For this reason, the study suggests closely examining investments that are directed to serve export markets and to also consider the trade-off of producing or buying electricity.

The study finds a wide gap between the planned capacity and actual progress in constructing new power generation capacity, meaning that significant surpluses for export are likely to materialise only after 2019. In the meantime, the study recommends making use of increased regional co-operation to meet peak demand and taking measures to reduce electricity losses.

“This study shows that it is time for governments to re-examine their plans and go for quality not only quantity when it comes to electricity generation”, says Pippa Gallop, CEE Bankwatch’s research coordinator. “Most of the countries plan many more coal and hydropower plants than they actually need or can afford, but with more strategic planning, attention to energy efficiency and regional co-operation to cover peak demand, the region could enjoy a much more realistic and rational energy future.”

The report will be presented at a press conference in Belgrade, Serbia, on March 25. For more details please contact Ido Liven at ido.liven@bankwatch.org

Bankwatch coordinators will also be available for interviews in Podgorica, Montenegro, on March 23 and in Sarajevo, Bosnia and Herzegovina, on March 26.

1. The countries included in the study are Albania, Bosnia and Herzegovina, Kosovo, Macedonia, Montenegro and Serbia. (According to the UN, the official name for Macedonia is “The former Yugoslav Republic of Macedonia”. The designation “Kosovo” is without prejudice to positions on status, and is in line with UNSCR 1244 and the ICJ Opinion on the Kosovo declaration of independence)