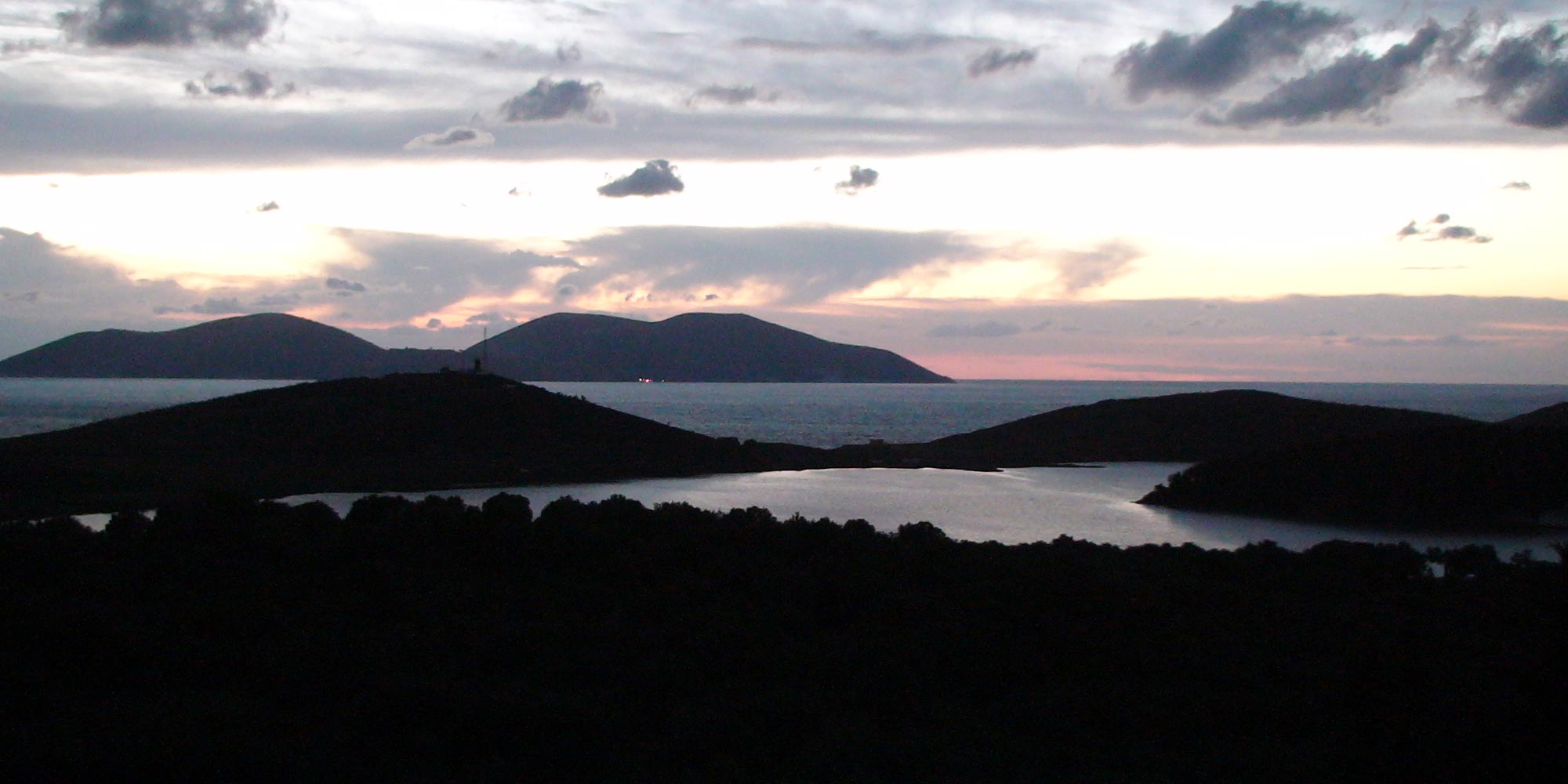 Albania’s historical reliance on hydropower and later dependence on energy imports became unsustainable due to the variable hydrological conditions and the boom of power demand by the industry, services and household following the fall of communism.

In its efforts to tackle the soaring energy crisis that hit the country around 2000, the Albanian government conceived a plan to construct an industrial and energy Park in Vlora, a coastal city in the south-east of the country. The park was to host a thermo-power plant, hydrocarbons storage and other strategic projects such as the Albania-Macedonia-Bulgaria Oil (AMBO) pipeline outpost.

The National Council of Territorial Adjustment approved the site for the industrial and energy park at the picturesque Vlora Bay in February 2003. The park was designed to boarder the city of Vlora to the south (100 meters from residential areas), the protected Narta lagoon to the north (500 meters) and the Adriatic Sea to the west.

Despite the plans for the extensive development of energy and oil related facilities no strategic environmental assessment (SEA) has been conducted to consider significant environmental effects of the whole complex on the Vlora Bay area in an integrated way. Upon the silent approval of the international creditors that expressed interest to finance some of the park’s components, the Albanian government deployed the “salami approach”, thus avoiding the conducting of an SEA while preferring to have independent assessments on each of the park components.

The video has been shot by Desdemona Stefa.

The World Bank, as the lead creditor, was responsible for the project preparation, including the assessment and public consultations. As co-financers to the project, the EBRD and EIB were reliant on information received from the World Bank and were ready to intervene in cases where they would identify inadequacies in the process.

Under such division of labour, the World Bank oversaw the preparation of the environmental impact assessment study (EIA), which was later reviewed upon the EBRD’s request, and the shortcomings were corrected in the addendum to the final EIA released in November 2003. Under the auspices of the World Bank, the project EIA scoping meetings and public hearings took place in Vlora in April and September 2003. Upon signing the project financing in 2004, the EIB and EBRD relied on all the stakeholders’ engagement events occurring in accordance with the Albanian legislation and the World Bank’s standards.

However, in the same year, the inhabitants of Vlora stood up in opposition to the projects, arguing that they had been repeatedly excluded from the decision-making over the energy and oil related developments in their town. Formalised as the Civic Alliance for the Protection of the Vlora Bay (the Alliance), the movement collected 14 000 signatures under a petition against the energy and industrial park and requested a referendum. In April 2005, the Alliance submitted a communication to the UN Aarhus Convention Compliance Committee (Aarhus Convention), alleging a violation by the Albanian government in April 2005 of its obligations to consult and inform the public about the territorial allocation of the energy and industry park in Vlora as well as the thermo-power plant project under several articles of the Aarhus Convention.

An investigation in 2007 by the UN Aarhus Convention Compliance Committee showed that the EIA process for the power plant did not provide sufficient opportunities for the town of Vlora to participate in the scoping sessions and public consultations.

A lack of public participation opportunities, as well as environmental controversies surrounding the thermo-power plant project, were also at the core of complaints lodged by the Alliance with the grievance panels at the World Bank and the EBRD in April 2007.

Both institutions approved investigations into the complaints and the EBRD Independent Recourse Mechanism (IRM) released its final Compliance Review Report after a desk top analysis in April 2008. While the IRM investigation concluded that the bank was in compliance with its policies in overseeing that adequate EIA was carried out by the project sponsor, it also observed that the bank failed to ensure full compliance with its obligations on public consultations related to the location of the Vlora thermo-power plant, and it warranted remedial changes to the Bank’s practices and procedures.

In May 2004, the Albanian Council of Ministers granted a Build-Operate-Transfer (BOT) concession agreement to the Italian investor Petrolifera Italo Rumena for the Vlora coastal terminal which was to store LPG, oil, and its by products. As per the February 2003 decision of the National Council for Territorial Adjustment, the terminal was to be located at the strait of land between the former PVC plant and the seashore, about half a kilometer south of the Vlora thermo-power plant site. The public ocean-front property was sold to the company for the symbolic price of one euro under the governmental program of incentives giving to the foreign investors. According to the concession, the land will become exclusively Italian after a 30-year period.

The terminal was presented as a specific project that was to be constructed and operated in an isolated way from the Vlora energy and industry park as well as the power plant. The construction works on the terminal were officially launched in September 2007. The project was however the object of fierce local protests, with locals asking for – and being denied on procedural grounds – a referendum on its implementation in October 2007.

In October, 2007, the EBRD announced its intention to finance the coastal terminal with a 15 million euro loan. A due diligence process to determine whether or not the EBRD would finance the terminal had been set in motion, involving consultations on the project’s EIA process. Public comments and the quality review of the EIA revealed that the study lacks monitoring and management plans, it does not offer solutions to oil spills and hazardous wastes removal and underestimates the impacts on protected areas. Additionally, the original EIA lacked any mention of resettlement and land compensation issues associated with the terminal, as several families were displaced as a result of project construction.

In June 2008 the EBRD withdrew from the project due to disagreement on the financial terms with the investor. In its official statement, the bank also highlighted the importance of the involvement of the public in decision making. Although the EBRD’s decision has certainly jolted the project, La Petrolífera Italo Rumena can still ask for financial support from other sources.

In part due to ongoing public protests and political deliberations, the government requested that the National Council of Territorial Adjustment review its decision and restrict the status of the Vlora park to an industrial one in May 2007. Although some of the park’s energy components have been moved to a new energy park in Porto Romano in the city of Durres, Vlora will host a thermo power plant and a hydrocarbons terminal.

The construction on both projects is ongoing. While La Petrolífera Italo Rumena is planning to start operating the terminal in the summer 2009, the Albanian Prime-minister Berisha announced that the Vlora thermo-power plant should be launched in May 2009.

In December 2007 the Italian energy company ENEL signed a Memorandum of Understanding with the Albanian government about construction of a 1 600MW coal fired thermo-power plant located in the area of Porto Romano in the Albanian coastal town of Durres, north of Vlora. At the end of 2008 a Durres Energy and Industry Park park was granted approval from the Regional Council of Territorial Adjustment. It remains to be seen if the Albanian authorities, the project sponsor, as well as potential creditors, have taken lesson from the unfortunate experiences in Vlora.

A tale of neglect: Energy finance figures from the Western Balkans

Vlora Thermo Power Plant, Albania – where is the electricity?

The oil and gas-fired thermo-power plant in Vlora, Albania – in a tourism-dependent city and only 100 metres from the protected Narta lagoon – was financed by the EBRD, the European Investment Bank and the World Bank. After a slew of problems, including lack of proper public consultation, the plant is not actually working – two years after it was supposed to have been completed – and it is increasingly doubtful whether it will start to produce electricity any time soon.

Who wants it? Who needs it? The Vlora coastal terminal, Albania

The terminal is to be located inside the industry park near a thermo-power plant which has already received lending support from the EBRD, European Investment Bank and the World Banks International Development Association.

The report summerises the findings of a recent Bankwatch and partner NGO fact-finding mission to Albania, in which meetings with the Albanian authorities, IFIs, investors and affected communities provided insights into large industrial and energy developments in the region.