Operational transparency standards at the European Investment Bank and the European Bank for Reconstruction and Development continue to deteriorate, according to the 2014 Aid Transparency Index (ATI) published in October by aid watchdog Publish What You Fund (PWYF).

PWYF’s fourth annual transparency rankings, that assessed 68 key global aid donors on how revealing – or otherwise – they are about their funding, placed the EIB and the EBRD in 16th and 17th places respectively out of 17 multilateral organisations. Overall, the European development banks now languish in 44th and 45th position, scoring 24.6% and 24.5% for transparency – a drop on their 2013 scores – and occupy the bottom places in PWYF’s ‘poor’ classification segment.

Commenting on this year’s research, which sees UNDP rated as the number one institution with a 91% transparency score, Rachel Rank of PWYF points out a longer-term, worrying trend:

“A lot of progress was made at the political level in the early days of aid transparency, including a promise to publish aid information to an internationally-agreed common standard by the end of 2015. But with a year to go until that deadline, progress has stalled. The ranking shows that no matter how many international promises are made, and no matter how many speeches there are around openness, a startling amount of organisations are still not publishing what they fund.”

Linda McAvan, Chair of the European Parliament’s Development Committee, reacted to the 2014 ATI by urging action:

“Greater transparency on aid flows is absolutely critical to enabling parliamentarians and civil society organisations to hold policy-makers to account. We need to ensure we are able provide European taxpayers with assurances that their money is being spent in the most effective way possible.” 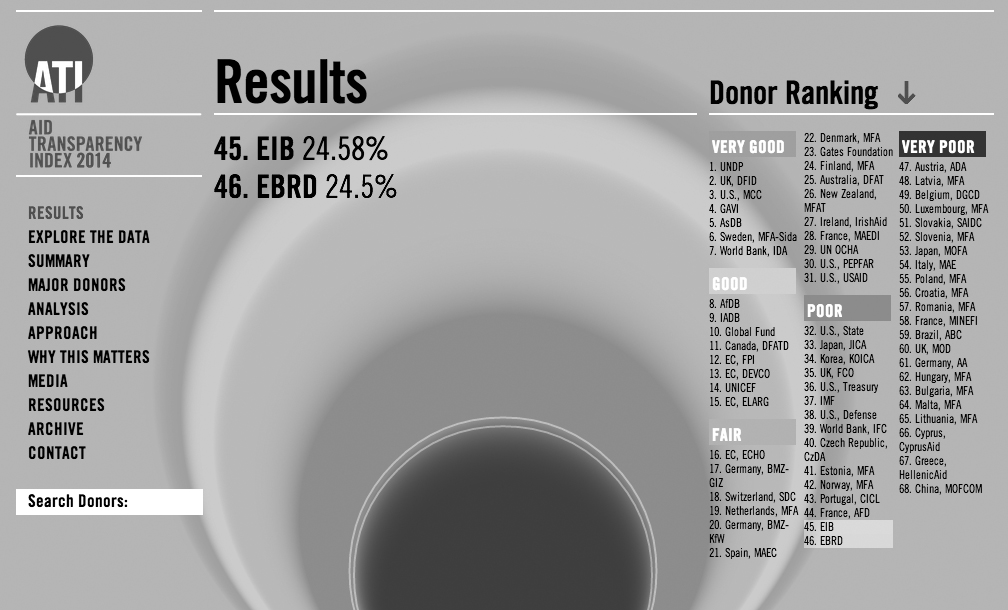 For the EBRD, then, while its blushes may have been spared slightly by being outscored by an aid agency from only one of its countries of operations (Estonia), this kind of drop in standards is alarming as it continues to expand and push into the middle east and north Africa region and as it hypes its role in extremely sensitive countries such as Ukraine. Indeed, the EBRD’s scaling up of support for Ukraine has involved the signing in May this year of an anti-corruption initiative with the Kiev administration. When it comes to scrupulous financial disclosure, accountability and related matters, so much for practising what you preach.

“Ranking last among multilateral development institutions speaks for itself and should be a strong motivator for the EBRD to improve its practices, especially now that it has a president who has personally committed to transparency. Some aspects are improving over the years, but the EBRD lags way behind its peers, and it has increasingly delegated disclosure responsibilities to its clients.”

Moment of truth for the EIB

What better timing for the EIB to have had its transparency difficulties highlighted, though, than at the very moment when it is reviewing its own transparency policy, due to be adopted in early February next year following a public consultation that is currently ongoing?

Tapping into this process, PWYF recommends the EIB to “ensure that its revised Transparency Policy reflects best practice on presumption of disclosure, exceptions, public interest overrides and independent appeals processes.” Will this be sufficient incentive for the EIB to sort out what campaigners feel could even be an imminent downgrading of the bank’s much discussed and much disputed approach to information disclosure?

Ten years ago, European Commission president – then Prime Minister of Luxembourg – Jean-Claude Juncker was agreeing with activists demonstrating outside the EIB’s annual meeting that the bank had to clean up its act, including on transparency and information disclosure. And while, over the intervening years, the bank has made attempts to improve its practices, campaigners who follow EIB operations have sensed of late that the bank has become slower at disclosing information – if not determined to restrict information.

In a totemic case this year, the EIB has continued to withhold important information about tax evasion allegations surrounding its USD 50 million loan to the Mopani copper mine in Zambia. Following accusations of tax evasion against the mine in 2011, more than 50 MEPs, in an open letter to the EIB, called for a moratorium on public financing for mining projects. The bank subsequently announced an investigation of the tax evasion allegations against Mopani Copper Mines plc, a Zambian company which is predominantly owned by Glencore.

Yet despite complaints by civil society organisations to the bank and the European Ombudsman, an open letter to the EIB president and the advice of the bank’s own complaints mechanism to make the investigation public, the content of the report still remains secret. Mopani is just one case in point of how the bank is failing to meet transparency and accountability standards expected from a public institution.

Yet, surprisingly, the bank’s current draft of its new transparency policy, as it was released to the public at the beginning of July, would mean a major step backwards and a dilution of the actual policy in terms of access to information and the public disclosure of information. Campaigners have identified the following most concerning elements of the draft:

Apart from simplification of the text, according to civil society analysis the EIB has actually proposed no improvements to its existing transparency policy. Little wonder that Joseph Stead, Senior Economic Justice Adviser at Christian Aid, has slammed the EIB’s “planned lurch towards secrecy,” while despairing that “at a time when the rest of the world has recognised that companies behave better when the public can find out what they’re doing, the Bank is proposing to conceal more than ever.”

While the policy review process has been attracting the critical eye of the European Ombudsman, the inescapable conclusion for now is that the EIB’s policy draft is less concerned with transparency than it is with confidentiality. An ever more expanding role for the EIB – as foreseen for instance in the Juncker investment package – must not be accompanied by shrinking accountability and fast disappearing transparency.

Full rankings and background information at the 2014 Aid Transparency Index

Back to Bankwatch Mail 61