Home > Publications > Greening the EBRD’s portfolio – or greenwashing it

Greening the EBRD’s portfolio – or greenwashing it

No matter how you look at it, the so-called sustainable energy approach being taken – and loudly trumpeted – by the European Bank for Reconstruction and Development (EBRD) is simply at odds with both climate science and the recently adopted Sustainable Development Goals (SDGs).

For one thing, the bank’s ‘green finance’ portfolio still contains investments such as large hydroelectric dams and improved efficiency schemes for fossil fuel-based energy projects. Boasting about big green numbers, the EBRD appears to be just fine with considering emissions savings from coal and gas projects, as well as projects which wreck protected areas, as sustainable energy investments.

Josué Tanaka, the EBRD’s managing director for Operational Strategy and Planning, Energy Efficiency and Climate Change, recently claimed that the bank had invested EUR 18 billion in 1000 sustainable energy projects since 2006. Tanaka also described how the EBRD intends to invest the same amount over the next five years, raising green financing to around 40 percent of its total annual portfolio.

Anti-coal and human rights campaigners, as well as civil society groups opposing large hydropower dams, digest such accounting with a huge pinch of salt. For example, what the EBRD likes to call ‘sustainable energy investments’ include a project for gas-to-coal fuel switch in the Egyptian cement industry and the construction of hydropower dams in national parks and critical habitats for highly endangered species such as the Balkan lynx.

The indivisibility and interconnectedness of the SDGs mean that we should not have to sacrifice critical habitats, making choices between saving the climate and saving critically endangered species. Yet, as a staunch fighter against climate change, the EBRD has had to make its choice against the Balkan lynx and for some years now has stubbornly stuck to its support for the Boskov Most hydropower plant in Macedonia’s Mavrovo national park (see elsewhere in this issue).

There are numerous other cases of unsustainable energy projects financed by the EBRD. For example, poorly conceived hydropower plants in Georgia, such as the newly proposed Nenskra dam. Bankwatch calls for the introduction of sustainability criteria for renewable energy projects have been brushed away by the EBRD. Yet with the number of ‘green energy’ projects rising, concerns too are rising about their adverse environmental and social impacts. 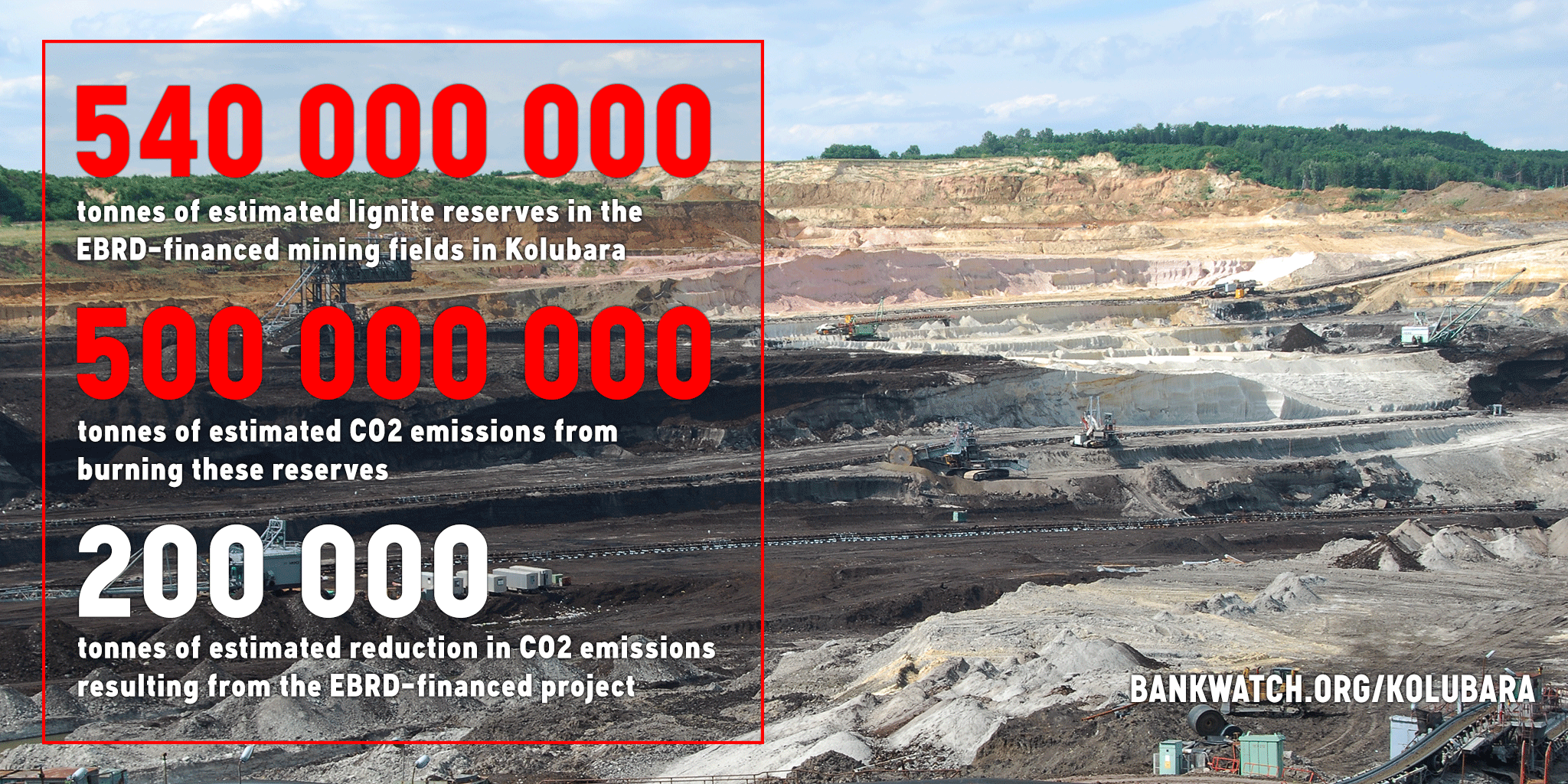 More about the project

The EBRD is expert too at presenting investments in coal projects as climate action. It has recently attempted to describe an EUR 80 million investment in the expansion (yes – more coal) of Serbia’s lignite mining as ‘environmental improvement’. To do so, the bank had to ignore the project’s link to thermal power production capacities and problems linked to the resettlement of communities living on the edge of mine pits.

Another curious example is the EUR 50 million investment in ‘fuel conversion and environmental upgrade’ (read: gas-to-coal switch) in Egypt’s cement sector. Of course, the EBRD’s project is focused on adding ‘alternative fuels’ – biomass, waste-derived fuel, and/or tire-derived fuel – to coal and/or pet coke, in order to neutralise carbon emission rises. And, therefore, this project is called sustainable energy.

Still, the Cemex project in Egypt would appear to run counter to the bank’s 2014 energy strategy which promotes a shift away from coal to cleaner fuels and renewable energy. More importantly, through this investment the EBRD supports a wider government policy that envisions the introduction of coal and reliance on this dirtiest of fossil fuels for up to 30 percent of Egypt’s energy needs by 2030, based on the assumption that renewables are a luxury that Egypt cannot afford.

Is natural gas a fossil fuel or sustainable energy?

Two more recent loans of USD 190 million and USD 200 million for combined cycle gas plants in Egypt also claim significant emissions reductions and improved energy efficiency. But then again, natural gas is a fossil fuel, is it not? For the EBRD, as long as there is any efficiency gain resulting from a project – even if more burning of fossil fuels is to be involved – then another ‘sustainable energy’ box can be ticked.

A more rigorous methodology used by Bankwatch, which excludes fossil fuels from sustainable energy, shows very different results to those touted by the EBRD. According to a new Bankwatch analysis published in November, the EBRD invested disproportionally more money in fossil fuels than in sustainable energy. For example, between 2012 and 2014, almost 70 percent of the bank’s financing in Jordan and in northern Africa countries’ energy sectors – a total of EUR 419 million – went to oil and gas-based electricity generation as well as hydrocarbon extraction and distribution.

The EBRD needs to reassess its sustainability metrics and its commitment to financing for development. In order to achieve its 40 percent target, the bank will either have to engage in full-on greenwash, calling any fossil fuels efficiency gains and monstrous hydro ‘sustainable’, or scale up investments for truly sustainable, small scale projects, and do it transparently. Let’s hope, in the aftermath of the Paris agreement, the EBRD takes the latter approach.