The EU-backed Energy Community Treaty, signed in 2005 and comprising the western Balkan countries, Ukraine and Moldova, has been widely hailed as encouraging regional co-operation. It also sets a legislative framework for the signatories (also known as the contracting parties) that should contribute, along with the EU accession process, to addressing the environmental and social impacts of the energy sector. Indeed, examples of the Energy Community’s added value are its adoption of renewable energy targets in October 2012, as well as a requirement for power plants to comply with EU emissions limits.

However the Energy Community’s potential is far from being fully realised. With possible changes to the Treaty post-2016 likely to be adopted this October, what needs to be done to make the Treaty more effective, and to ensure that real communities, real people are not getting a raw deal from investments being developed and promoted under the Energy Community banner?

The Energy Community’s priority projects are set to include several environmentally damaging coal and hydropower projects that will be fast-tracked for financing over the next years. 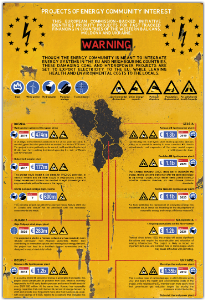 Key facts about the Energy Community

The Energy Community brings together Albania, Bosnia and Herzegovina, Kosovo, Macedonia, Moldova, Montenegro, Serbia and Ukraine with the stated goal of extending EU internal energy policy to south east Europe and the Black Sea region in order to build a legally-binding framework. The Treaty aims to create a stable regulatory and market framework in order to:

1. Attract investment in power generation and networks;
2. Create an integrated energy market allowing for cross-border energy trade and integration with the EU market;
3. Enhance the security of supply;
4. Improve the environmental situation in relation with energy supply in the region; and
5. Enhance competition at regional level.

Currently, a High Level Reflection Group is evaluating the institutional set-up and working methods of the Energy Community and will report in June 2014 to the Ministerial Council with suggested improvements. The first step was an online consultation, which took place between December 2013 and February 2014. 38 online questionnaires were submitted during this consultation, with the majority coming from civil society (24).

To this end, addressing air and water pollution in the region would be a good start, through the immediate adoption of EU directives on:

This all might sound demanding for countries which are patchily implementing even their current obligations, but in any case they will have to be implemented by countries seeking to join the EU, so the only question concerns the timeline. And let’s not forget as spring arrives that people in the region are already paying heavily for pollution. Addressing the increasingly horrendous air quality in cities such as Pristina, Tuzla and Pljevlja, in which people are losing years of their lives due to highly polluting emissions from coal-fired power plants, would not only save lives but also money.

The World Bank estimates that Kosovo currently has 835 early deaths per year and estimated direct costs of around EUR 100 million annually due to air pollution, while a recent study estimated that in the Tuzla region in 2013 pollution from coal caused a loss of around 4900 years of life, 131,000 lost working days, 170 hospitalisations due to heart and respiratory illnesses and around EUR 61 million in economic costs.

These directives would also put in place a minimum level of safe and responsible management and recovery of extractive industry waste throughout the region and would further help to close the existing, so-called ‘thermal efficiency loophole’. This loophole exists due to the fact that even though Energy Community countries have committed to comply with limits on emissions of sulphur dioxide, nitrous oxide and dust from power plants by the end of 2017, because they have not committed to a minimum thermal efficiency for power plants under the Energy Community Treaty, a high level of pollution can still be produced per unit of energy produced due to the low efficiency of the plants.

The inclusion of these directives into the Energy Community is a matter of creating a level playing field for widening the EU electricity market. Countries wanting to participate need to play by all the rules, not just some of them, otherwise the companies producing and selling electricity have an unfair advantage, while the public and environment pay the costs.

Many of the Treaty obligations have so far not been well-implemented by the contracting parties, and one of the reasons for this is the lack of monitoring and enforcement capacity of the Energy Community secretariat, especially in the fields of environmental and social protection.

Just one specialist covering environment issues and one person for both oil-related and social issues can hardly bring about the desired results. In addition, there is a lack of ownership over the Energy Community among the people whom the Treaty is supposed to serve. One way to address this is to allow civil society representatives from the environmental, social and industrial sectors to be present as non-voting participants or observers in the Energy Community’s regular meetings.

The Energy Community Treaty currently provides a dispute settlement mechanism whereby final decisions are taken by a political body, the Ministerial Council. Proposals for a separate Court, similar to the European Free Trade Area court, have been put forward. If this is implemented, the Court should remain independent from the contracting parties in order to avoid politicisation, have the last say in decisions rather than being subject to other Energy Community bodies and should give the environmental acquis as much priority as is given to the energy acquis.

Getting to grips with corruption

At the same time, it is difficult to conceive how the gap in implementing the Energy Community can be closed without also addressing wider issues of corruption and the rule of law in the Community countries.

Planned coal projects in the western Balkans are not just bad for the climate and people’s health – they’re also riddled with attempts to bypass or bend tendering procedures. While far from perfect, including the EU directive on public procurement in the revised Energy Community Treaty would at least help ensure that public tenders take place in the construction of energy infrastructure.

A further reason why energy efficiency and renewables are not making the headway that they could in the region is because entrenched energy companies still receive subsidies. The Energy Community’s current provisions to prevent state aid are not clear enough or well-enough implemented, and need too to be improved.

In short, all of the areas above need to be improved if the Energy Community is to flourish beyond merely serving the business community and, in the near future, start to make a difference for real communities currently suffering acutely when it comes to energy provision.