For more than 50 years, the lignite mines in Serbia’s Kolubara basin have been expanding, effectively engulfing the few small communities living between them. For local residents, whose homes have quite literally been teetering on the brink of the mines, life has become unbearable. But a recent court ruling might be paving the way to a long overdue reprieve for residents who have been promised to be relocated. 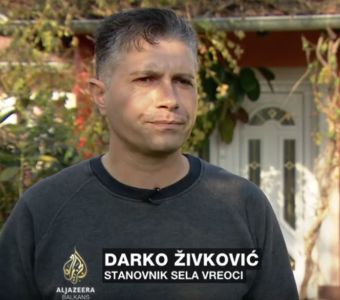 Spanning over 60 square kilometers, Kolubara is home to one of Europe’s largest open cast lignite mines which feeds four nearby power plants (Nikola Tesla A, Nikola Tesla B, Kolubara A, and Morava) with a total installed capacity of 3255 MW, all operated by the national power utility Elektroprivreda Srbjie (EPS).

Through the years the expansion of the mines has been enabled primarily by successive loans from the European Bank for Reconstruction and Development. The village of Vreoci, 60 kilometres south-west of Belgrade and sandwiched between two of the mines, is one of the most heavily affected among the mining regions across the Western Balkans.

Deceived by authorities and financial institutions equally with promises of fair relocation, the 3000 strong community has only witnessed their lives change for the worse in the last decade, while coal excavators have been eating their way into the land closer and closer to their homes.

“Our houses suddenly began to crack since the beginning of this year, and we are threatened from one side, they cut off our water, our wells have dried up and now we are dependent on the water the mining company delivers in tanks every day,” Darko Živković, a resident of Vreoci, told Al Jazeera in October 2015.

The lignite pit has already reached the Živković family’s backyard, and they are concerned that unless they move out soon, their house will simply collapse on them. But they are not the only ones.

The fate of the village of Vreoci has been hanging on a thin string called “The Blue Book on Resettlement” since 2007. This is a document co-signed by the Serbian Government, the national power utility EPS, and the local council of Vreoci. The Blue Book sets out the guidelines for resettlement of the residents of Vreoci and was supposed to be fully implemented by the end of 2015. This has not happened.

So, Darko Živković and his family decided they had enough and filed a lawsuit against EPS. The court ruling, delivered in mid-June, orders the energy utility to urgently expropriate their land so that they receive a compensation that would allow them to start a new life in a new place. While there might be a rather long back-and-forth process, this momentous ruling is a breakthrough in a painful saga lasting for at least 10 years. Not least, this decision creates an indisputable precedent for at least another hundred families who have signed a petition to be collectively resettled. It also shows that the Blue Book must be implemented.

In the 10 last years, over one thousand residents from Vreoci have been demanding to be resettled as an integral community. They invoked rules laid down by the government and by international financial institutions to ensure that this process be carried out justly, completely, and that their chosen economic means of survival would, at the least, be equivalent to what it was before relocation. These rules are also intended to ensure that they receive adequate compensation for any loss of land, resources and jobs, and to rebuild their homes.

The Živković family now stands as an icon of a David against Goliath battle, paving the way for many other families in Vreoci whose life has been put on hold for years by wrong priorities of the authorities in Serbia who have been placing coal before people.

Last week this development was complemented by another first-of-its-kind in Kolubara when the Energy Community’s secretariat decided to open an infringement case against Serbia for failing to comply with state aid legislation. Formally announced last week, this is the first such dispute under the Energy Community Treaty. In its communication to the Serbian government, the secretariat addresses four state guarantees for loans from international financial institutions to EPS for projects in the Kolubara mining basin.

These recent developments are but the latest reminders for the Serbian government that further investing in coal only spells trouble for the country and its people.