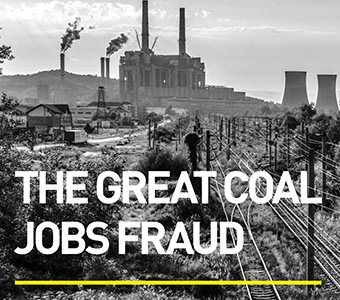 Several years after most of the EU has stopped planning new coal plants due to their poor economics and their climate and health impacts, several new plants are still being pushed across southeast Europe. The plans are in most cases accompanied by promises of creating new workplaces or saving current ones. High unemployment across the region makes this an easy way to score political points.

The sad truth, however, is that workers and communities are being misled. Bankwatch has crunched the numbers and found that in most cases, the claims being made are exaggerated. Even the current levels of employment cannot be maintained in most cases, so promises of new jobs are nothing short of fraudulent.

Most coal plants across the region run on lignite from captive mines, which employ many times more people than the power plants themselves. A look at the current labour productivity levels across the region shows that there is tremendous variation, with the least efficient mines in the Federation of Bosnia and Herzegovina and the most efficient in Greece. 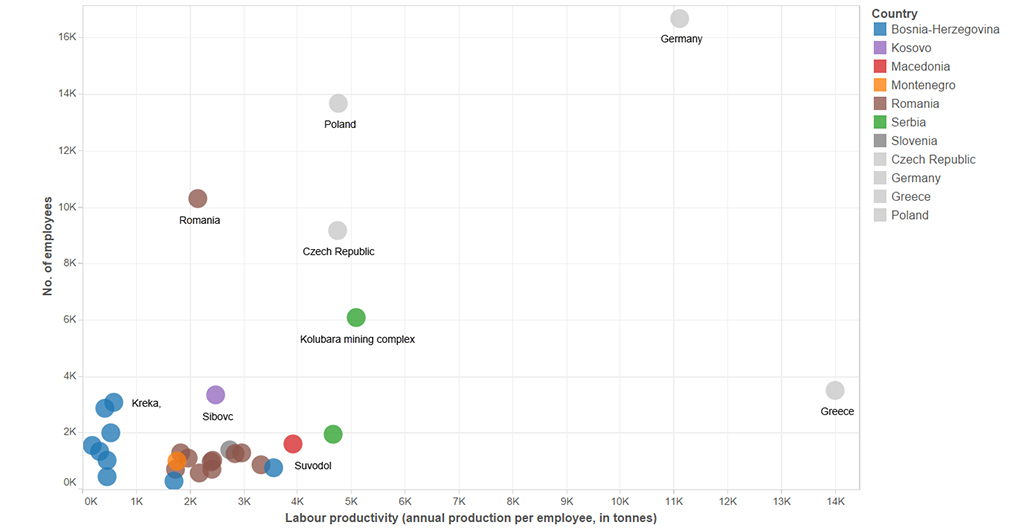 Chart: Comparison of labour productivity in mines across the Balkans and those of other countries.

Ironically, the countries in which the most extravagant claims are made around future employment in the mines – Bosnia and Herzegovina and Montenegro – are among the countries with the least productive mines. They are therefore the ones least likely to be able to fulfil these promises.

In the Federation of Bosnia and Herzegovina, claims are frequently that the planned Tuzla 7 unit will save 3500 jobs in the nearby mines. But this is impossible, and even the state-owned utility Elektroprivreda BIH’s own documents admit this. In fact, if productivity levels at the mines reached those of the Czech Republic or Poland, the number of workers in the mines would be nearer 450.

It’s a similar story in Montenegro. The government insists that the planned Pljevlja II power plant would safeguard existing jobs and create new ones, but this can’t possibly be true. In 2014 the Pljevlja mine employed 921 workers. The government‘s own Pljevlja II feasibility study shows that this number would have to shrink to 520-544 by 2025 if the new plant were to have any chance of being economic. However, our new study shows that even this seems generous – if Pljevlja‘s productivity was at the same level as that of Drmno and Kolubara in neighbouring Serbia, there would only be around 330 people employed.

Gone are the days when uneconomic coal mines could be kept alive with subsidies.

However, countries with higher productivity levels have no room for complacency either. Germany’s lignite mines are among the most productive in Europe, yet with wholesale electricity prices low, they and the nearby power plants are having serious financial problems. A stark example of this is Vattenfall’s sale of its lignite power plants and mines in Germany – a deal expected to clock up a loss of EUR 2.4-2.9 billion. The company still considered this deal better than holding on to them.

Most of the plants and mines in southeast Europe are already uneconomic and even if no new plants are built, the number of workers, particularly in the mines, will have to be reduced.

Gone are the days when uneconomic coal mines could be kept alive with subsidies – all the countries in the region are either EU members or signatories of the Energy Community Treaty which obliges them to follow EU state aid rules in the energy sector.

All this means that a well-planned and just transition for the workers and communities that depend on coal is needed. As our study describes, the Romanian hard coal sector has already undergone a painful restructuring and closure process and provides a stark lesson of what can happen if coal mine closure is carried out without good planning and adequate inclusion of those affected.

The second transformation is that of the whole energy sector, to an energy-efficient, renewables-based system which represents both a mitigation measure to slow climate change, and an adaptation strategy to make the system more resilient to the impacts of climate change.

Although these two transformations may not always coincide geographically, it’s worth exploring to what extent jobs in the coal sector could be replaced by those in buildings retrofitting and renewable energy.

The EU already hosts almost 1.2 million renewable energy jobs. While the southeast European countries haven’t taken full advantage of these opportunities yet, Slovenia already has 3800 people employed in the renewable energy industry, primarily in solid biomass, heat pumps and photovoltaics. Croatia has 3400, mostly in solid biomass and wind energy, while Romania has 18 950 people employed in renewables.

The opportunities are there, but so are the threats. If southeast Europe’s politicians continue to bury their heads in the sand and make unrealistic promises they can’t possibly fulfil, sooner or later people are going to catch on, with unpredictable consequences. It’s in all our interests that the planning for a just transition starts right now.

Read more about coal in the Balkans