Building the Energy Union, the European Commission pretends that all is well for renewables in Croatia and unnecessarily fixates on diversifying gas supply instead of managing demand. 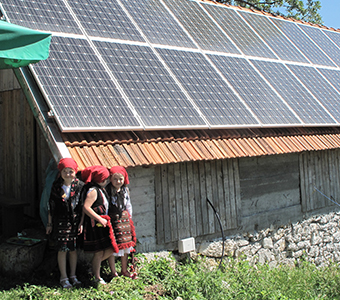 See earlier installations on the Czech Republic, Hungary and Latvia and don’t miss the next posts.

Similary to Hungary and Latvia, Croatia has recently attracted praise from EC Vice-President Maroš Šefčovič for being on track to meet its 2020 targets for greenhouse gas emission reductions and renewable energy. While this is certainly better than not being on track, to anyone looking more carefully, this is more a sign that the targets are too unambitious than that Croatia is doing particularly well.

Croatia produces around 70 percent of its own gas, but the European Commission still emphasises the need to diversify sources of supply.

Croatia’s greenhouse gas emissions fell by 17.3% between 1990 and 2012. So far, so good. But 16.6% of the reduction took place before 2000, when Croatia was first at war and then undergoing a rapid decline in its industrial sector (pdf). Importantly though, these gains will be in danger if Croatia builds the planned 500 MW Plomin C coal power plant, which would prevent the country reducing its greenhouse gas emissions by 80-95% by 2050 as the EU aims to do.

The EU has the power to prevent this: media reports suggest that the EC is currently assessing a request by the state-owned electricity company Hrvatska Elektroprivreda for a long term power purchase contract for Plomin C. Such a contract should certainly not be approved for projects which are so obviously in conflict with EU climate goals and a positive response from the EU would completely undermine Croatia’s apparent ‘good performance’ on climate targets.

As for Croatia’s renewable energy record, the country has a long tradition of using hydropower – in 2005 around 33 percent of the country’s electricity was generated from mainly large hydropower plants. Wood biomass has long been used for heating as well: in 2005 it made up 11 percent of Croatia’s total energy consumption.

However other forms of renewable energy have been slow to get going due to administrative complications. In recent years wind energy has finally taken off, and by the end of 2014, 346.5 MW was installed. Yet the government is still preventing the development of the wind and solar PV sectors by placing extremely low caps on the amount of capacity eligible for feed-in tariffs in the country’s 2013 Renewable Energy Action Plan until 2020. The quotas set out for solar PV (52 MW) and wind power (400 MW) have already been filled, effectively braking further development until unless a new Plan is developed. Solar thermal is also underused compared to the obvious potential in this very sunny country.

Against this background, crediting Croatia with a ‘strong performance’ in the area of decarbonisation sends the wrong message that the government has done its bit. Incentivising community-based energy projects, raising the PV and wind quotas and providing financial support and grid access for small producers are measures that still need to be taken for an Energy Union that “will ensure that Europe has secure, affordable and climate-friendly energy”.

If every residential building in Croatia was well insulated and had solar collectors and solar PVs on the roof, and heating from heatpumps or energy efficient biomass boilers became widespread, how much would we still need to care about where gas imports come from?

But what about the rest of the assessment? What are the areas where the European Commission sees need for reform?

Vice-President Šefčovič rightly points to the need to improve energy efficiency, especially in buildings and transport, and points out that Croatia’s efforts for regional cooperation on electricity generation adequacy will be more cost-effective than a national approach. But the rest of the assessment – as is all too common from the European Commission these days – is fixated on gas.

Croatia produces around 70 percent of its own gas, but the European Commission still emphasises the need to diversify sources of supply. It is true that Croatia was one of the affected countries during the 2009 Ukraine-Russia gas disputes, but surely this is a reason to lessen dependence on gas per se, not just on Russia? It’s not as if the alternative sources of gas are any better – Azerbaijan, Algeria, Libya, Nigeria…

If the EU was to join up its thinking a little more, it might find that the gas issues can be solved through the energy efficiency issues it mentions, in combination with the renewable energy issues that it doesn’t mention. If every residential building in Croatia was well insulated and had solar collectors and solar PVs on the roof, and heating from heatpumps or energy efficient biomass boilers became widespread, how much would we still need to care about where gas imports come from?