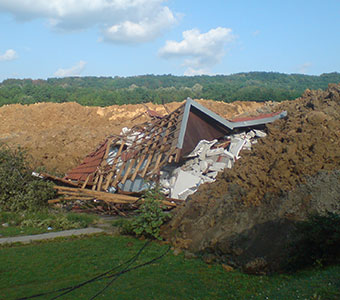 In a few hours I will be in Vreoci, a village stranded in the heart of the Kolubara mining basin in Serbia, one of the biggest in Europe. I am there to present the findings of an analysis of involuntary resettlement practice for coal mining in this region. The study ‘A clear and present danger’ (pdf), commissioned by Bankwatch and executed by Nostromo Research, shows how the European Bank for Reconstruction and Development has failed to enforce a number of its own standards on involuntary resettlement.

I am always nervous when I travel to Vreoci. I’ve been there three times already in the last year: in winter, when people burn lignite to heat their homes, making the air unbreathable; in spring when smoke from spontaneous coal fires in one of the fields covered part of the village in thick smoke; and in the dry summer, when the locals had no running water because they are connected to the same water network as the mines, and obviously it’s the coal digging that comes first.

These are the conditions in which over 3000 people live every day as a result of extensive mining in the Kolubara region, supported also by the European Bank for Reconstruction and Development (EBRD) and the German development bank KfW. Their 2011 loan to the state owned Elektroprivreda Srbije (EPS), which operates the mines in the Kolubara basin, theoretically supported “environmental improvements”. In reality, the only improvement visible seems to be the amount of lignite extracted.

After more than five decades of mining little has been done to address the environmental and social impacts for the villages in the region and the local communities have asked repeatedly to be collectively resettled and justly compensated in a way that allows them to preserve their livelihoods.

But a resettlement plan (known as the “Blue Book on resettlement”), agreed in 2007 between the Serbian government, EPS and the local council of Vreoci, is still far from being fully implemented. Our new report shows that the EBRD has failed to enforce a number of its own standards on involuntary resettlement, and both the EBRD and KfW have failed to carry out a full social impact assessment of the mine expansion. As a result, the longer a response is delayed, the more the locals suffer.

Our analysis argues that in spite of the EBRD’s declared mission to increase the quality of the lignite and thus reduce greenhouse gas emissions from fuel combustion, in reality what EPS was doing on the ground was promoting a major expansion of lignite extraction – with the equipment covered by the 2011 EBRD and KfW loan. This also inevitably entailed the need for resettlement. The Banks ignored the fact that the Kolubara Mining Basin is effectively one field, integrally managed by a single enterprise, MB Kolubara, controlled by the banks’ client EPS.

Now, the EBRD is considering a new EUR 200 million loan to “restructure and refinance expensive short to medium-term EPS financial debt” (with a target date for approval on October 28).

Even if it is a corporate restructuring project, it does include “environmental and social due diligence focus[ed] on opportunities to improve environmental, safety, social and labour governance capacity to develop a more strategic approach to managing these issues”.

Although the more optimistic of us would say that the sheer public acceptance of a problem is one step forward towards improvement, I remain faithful to one of the recommendations in our study launched today: the EBRD should publicly acknowledge a major responsibility for the environmental damage and human rights violations taking place in the Kolubara mine basin since 2011, and do right by the community of Vreoci.