Home > Blog entry > Energy lending at the EBRD: Fossil fuels up, renewables down

What’s going on with the Green Economy Transition at the European Bank for Reconstruction and Development? 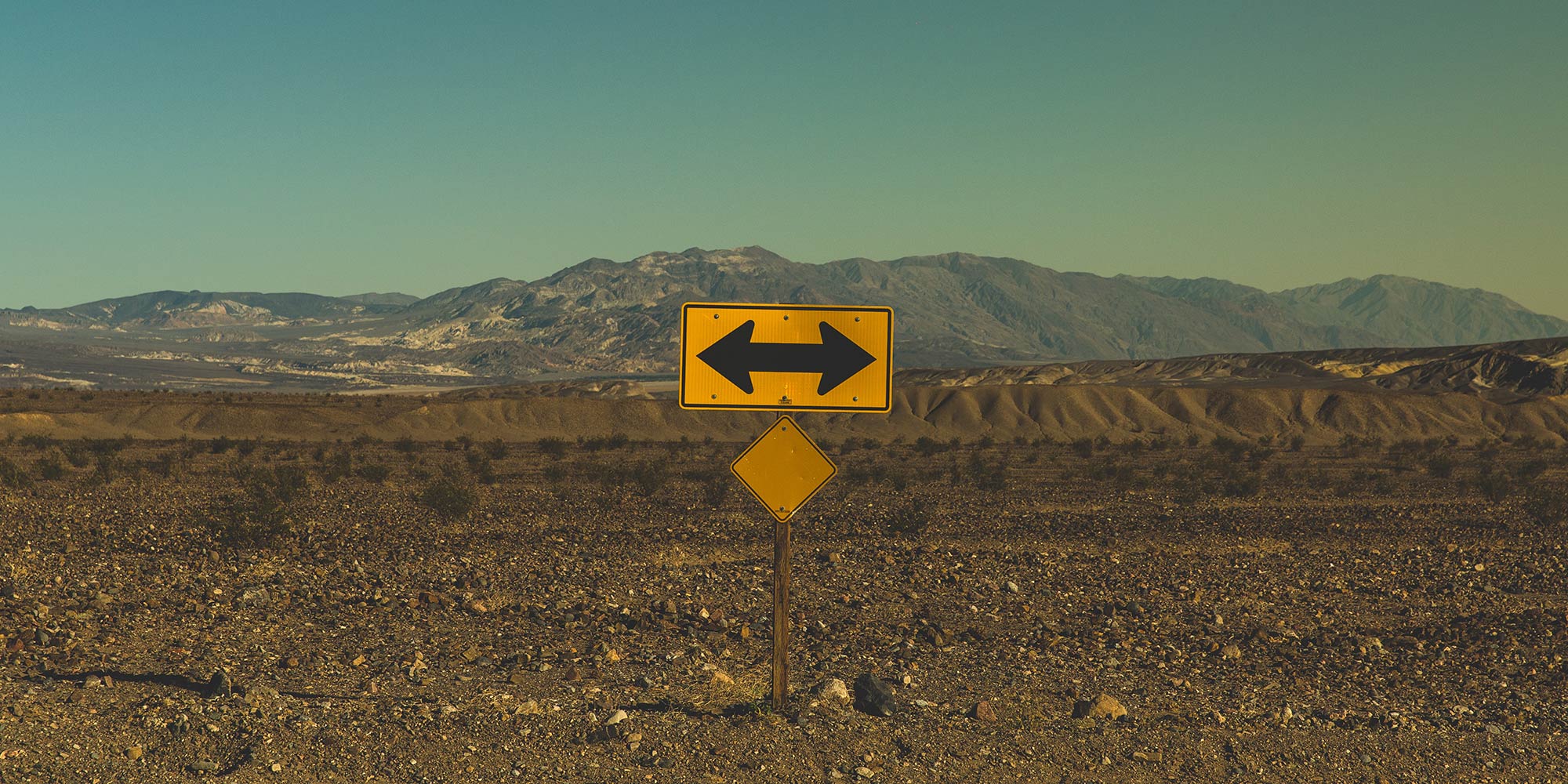 Which direction is it for the EBRD's energy lending? (Photo by Pablo Garcia Saldaña on Unsplash)

How quickly time has passed. Tomorrow’s One Planet Summit in Paris marks exactly two years since the Paris Agreement was concluded, highlighting once again the increasing urgency of tackling climate change.

If global temperature change is to be limited to no more than 1.5°C – and it must – no more fossil fuel electricity generation facilities can be built globally after this year, according to a 2016 Oxford University study.

In fact, not only can no more fossil fuel power plants be built, but no more fossil fuel infrastructure at all, according to a 2016 Oil Change International study. The carbon emissions from the oil, gas, and coal in the world’s currently operating fields and mines would already take us beyond 2°C of warming, and even without coal, the reserves in currently operating oil and gas fields would take us beyond 1.5°C.

Multilateral development banks, among them the European Bank for Reconstruction and Development (EBRD), are positioning themselves as pioneers in the green finance agenda, but if they are to live up to this role, they need to be more consistent in the fight against climate change.

The EBRD’s fossil fuel financing actually increased between 2010 and 2016. In 2016 the increase was particularly marked.

Having closely watched the EBRD’s investments in the energy and natural resources sectors for a long time now, we‘d seen some progress in recent years, including an increase in lending for wind and solar, and a commitment to virtually halt lending for new coal power plants in 2013. This was an important step forward, but not nearly sufficient to address the massive scale of climate change we’re facing.

The EBRD’s recent approval of USD 500 million for the massive Southern Gas Corridor project also suggests that the bank and its shareholders haven’t yet internalised this message. But as the bank is due to review its Energy Strategy in 2018, it is crucial that it finally stops financing fossil fuels.

With a look at the EBRD’s energy-related investments from 2010-2016, let’s see how it’s progressing.

Overall, the EBRD lent EUR 9.96 billion for energy-related projects between 2010 and 2016. Around 41 percent of this (EUR 4.05 billion) supported fossil fuels. This does not include projects which support fossil-fuel heavy utilities where it is hard to say what the money was used for, e.g. Elektroprivreda Srbije (EPS), Bulgarian Energy Holding (BEH) in Bulgaria, Samruk Energy in Kazakhstan and Aksa in Turkey. 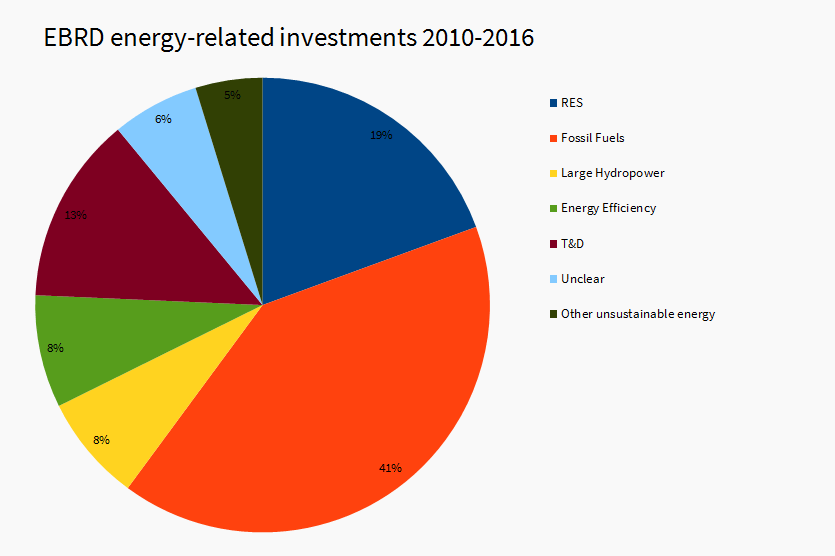 Alarmingly enough, the EBRD’s fossil fuel financing actually increased between 2010 and 2016, from EUR 600 million to EUR 774 million. While the average remained similar for most of the period, in 2016 the increase was particularly marked. 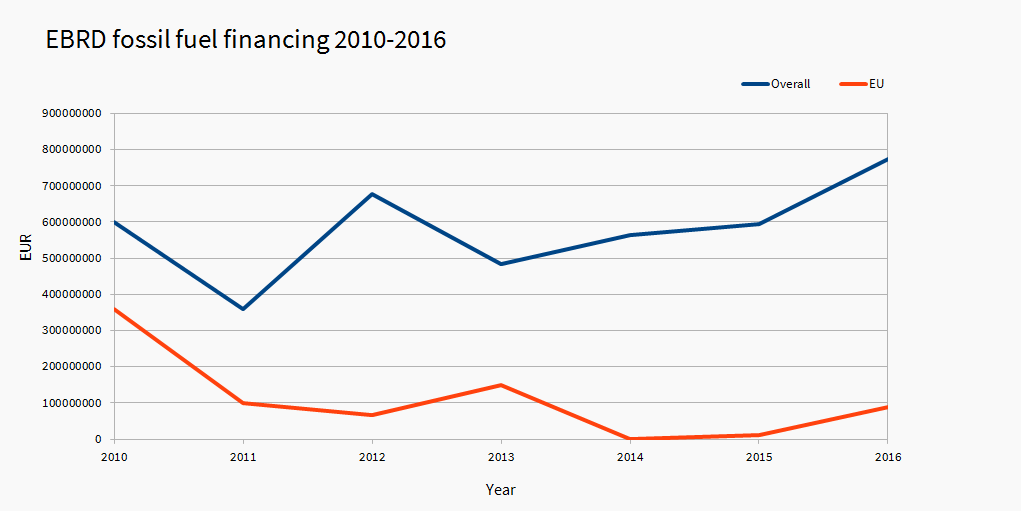 An increase in fossil fuel lending might have been expected because of the bank’s expansion to the oil and gas-heavy southern Mediterranean. But as the bank hasn’t made any new investments in Russia – another fossil fuel-heavy country – since July 2014, it should have been able to reduce fossil fuel investments overall.

In fact, most EBRD fossil fuel investments took place in Central Asia, Eastern Europe and the Caucasus and the EU during this period. Probably the only good news here is that there has been a general downwards trend in EBRD fossil fuels financing within the EU since 2010. However, the bank still invests in fossil fuels in the bloc, where not as many financial constraints to the energy transition exist as in many other parts of the world.

One area where the EBRD has made some progress in moving away from fossil fuels is in its support for new or additional electricity generation capacity, in which fossil fuel projects made up 24 percent of financing while 65 percent went to renewables. Fossil fuel financing in this sub-sector peaked in 2012 but has been relatively low since then. It’s not clear whether this is the result of the bank’s 2013 Energy Strategy or rather changing market conditions. 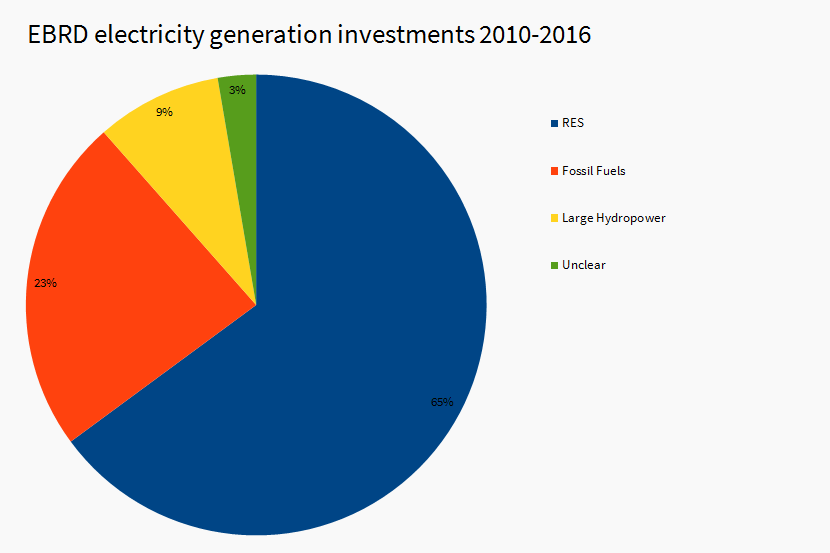 The fact that such a high percentage of electricity generation investments supported renewable energy is generally welcome. However, not all of the projects can be regarded as sustainable, as they also include small hydropower plants which have proven damaging eg. in the Western Balkans and geothermal plants in Turkey which bring with them unusually high CO2 emissions by geothermal standards, comparable even to coal-fired power plants. 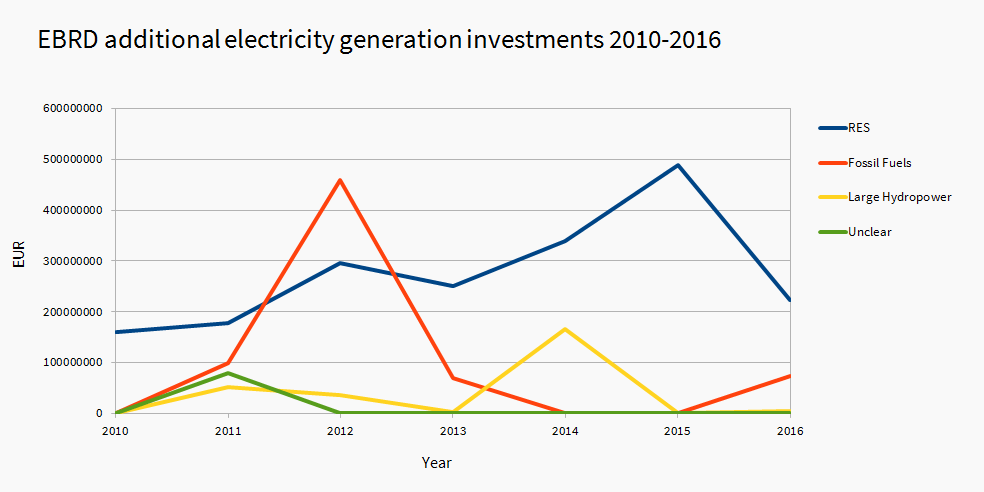 Wind dominates the EBRD’s renewable projects, with nearly 68 percent of the investments. The main change within the last few years is the appearance of geothermal and solar in the mix. Solar grew from virtually nothing in 2006-2011 to make up more than 11 percent of renewables investments in 2010-2016, presumably due to dropping prices and increased EBRD investments in the Mediterranean countries. 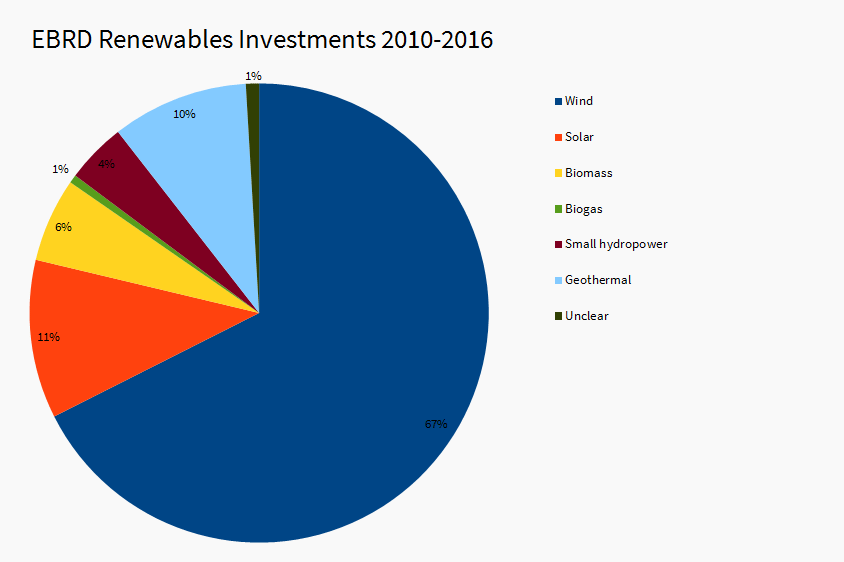 There also appears to be a much smaller percentage of financing for small hydropower plants than in the 2006-2011 period, when it made up 17 percent of renewables financing. However this is difficult to confirm as some projects may have been financed through commercial bank intermediaries. These would not show up in the statistics because the banks do not publish lists of final beneficiaries.

EU countries have received most support for renewable energy. The EU accession countries have received very little, although our monitoring suggests that this is not due to a lack of willingness from the EBRD but rather due to barriers within the countries. Some renewables support has taken place in Turkey and the Mediterranean but it has been heavily exceeded by fossil fuel investments. 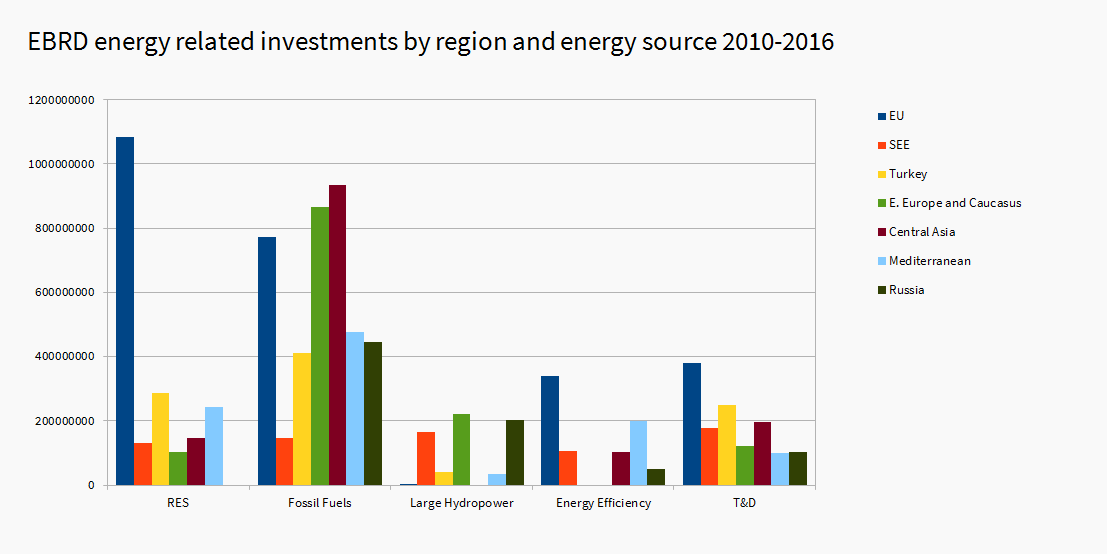 Priority issues for the EBRD as it reviews its Energy Strategy

In view of all this, our calls to the EBRD to halt financing for fossil fuel projects are as relevant as ever. This has to include not only direct project financing but also corporate investments in fossil-fuel heavy utilities. Diversification of commodity-dependent economies has been an issue at the EBRD for many years and there is still much work to be done to avoid indirect fossil fuel financing through e.g. transportation.

At the same time, the bank has to make sure that sustainability is not sacrificed as it looks to make up for the lost business in Poland in its renewables portfolio. It needs to avoid supporting unsustainable renewable energy projects like CO2-intensive geothermal projects and hydropower projects with impacts on sensitive areas or species.

As the bank’s 2018 Energy Strategy review approaches, we’ll be keeping a close eye on the situation. Watch this space…