Home > Blog entry > The G8, tax havens and the need to clean up our own “bank yard”

While the G8 leaders claim they are at war with tax avoidance, their own bank, the European Bank for Reconstruction and Development is involved in deals linked to offshore financial centres. 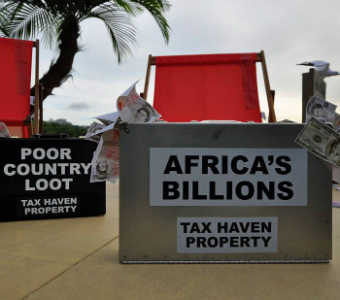 Tackling tax avoidance was one of David Cameron’s priorities for the UK-hosted G8 meeting during the last two days. The recent disclosure of more than 120,000 offshore companies and trusts by the International Consortium of Investigative Journalists, the scandal over a French minister’s Swiss bank account or the revelations about Google’s, Amazon’s and Apple’s use of tax optimisation via offices in Ireland has put world leaders under pressure to act. Cameron wants to end the era of “secretive companies in secretive locations” that cost exchequers around the world billions of pounds in lost revenue; Hollande seeks to “eradicate” tax havens; both are strongly supported by the European Union with Jose Manuel Barroso hoping that „bank secrecy and tax havens will soon belong to the past.”

Even if we took this high-level enthusiasm and the Lough Erne Declaration at face value, addressing tax evasion requires global coordination, political will, and the guts to challenge large corporations: one G8 summit is not enough to deliver on all that.

The good news is that there are plenty of ideas to tackle the problem of the use of tax havens. Exposing companies that hide accounts in offshore centres with more transparency and access to information is one of them.

Not providing public support to these companies is another one.

The European Bank for Reconstruction and Development: public money in liaison with tax havens

The eight biggest shareholders of the European Bank for Reconstruction and Development (EBRD) are also the G8 countries. Together with the EU, they hold a large majority of the Bank’s shares. When the EBRD extended its activities in the MENA region, it had to be endorsed by the group of 8.

And guess what? The EBRD is lending large sums of money to entities that are registered in some of the most famous offshore financial centres!

One of the most striking aspects of this trend is the EBRD loans to private equity funds. Private equity funds’ contribution to the common good is in itself extremely questionable and it’s generally worrying that the EBRD has become a praised investor in such entities. But focusing on the tax havens angle, it’s shocking to note that almost all of the private equity funds in which the EBRD invested were registered in well-known offshore centres. Jurisdictions where, of course, they have no real activity. Take randomly the last 10 private equity funds deals signed by the EBRD (pdf): three are incorporated in the Cayman Islands; three in Guernsey; Luxembourg, Mauritius and Jersey each host one; and the last one, registered in the Netherlands, is managed by a Swiss fund-of-funds.

Besides these cases, also other EBRD projects are linked to tax havens, from the infamous BTC pipeline – three of the companies involved in the BTC consortium are registered in tax havens – to the very recent Egyptian-Ukrainian KEC oil project for which the EBRD Board just approved a USD 40 millions loan (May 29) despite the fact that the company is registered in Jersey.

G8: clean up your “bank yard”, get the EBRD out of tax havens!

To recap: We have 8 leaders plus the EU, all extremely motivated to put an end to the tax avoidance scandal. And they all own a bank, the EBRD that lends public money to entities that are openly using offshore jurisdictions. The obvious next step for these leaders is to enlist the EBRD in their struggle against tax avoidance by putting an end to its involvement with tax haven companies.

The timing is excellent: The EBRD is already planning to revise its policy on offshore jurisdiction this year.

And there would be a number of advantages:

On the basis of a precautionary principle, it would make sense for the EBRD to refuse to finance a company registered in a place recognized as an „offshore financial center“ for a project that will take place elsewhere. Companies that have no actual activity in these territories don’t need to be registered in Jersey or the Cayman Islands to support a business in Romania or Tunisia.

You don’t have to be a rocket scientist to recognize the very high risk of scam, and when you manage public money, you’d better be cautious to avoid any risk.

P.S.: Of course the number of EBRD deals could drop, maybe drastically. That’s one of the potential side effect of chosing quality: it can reduce the quantity.

Update June 20, 2013: On his blog, also former EBRD director Kurt Bayer pointed out that international financial institutions need to take a more pro-active approach on dealing with tax havens. Among others he writes:

[I]n spite of all the international clamor about tax evasion and tax havens, the mindset of EBRD (and probably IFC and other) bankers has always been: if we disallowed or discouraged offshore activities, we would lose market shares and investment projects. This is an unconvincing argument, however, since a public-sector bank owned by (in EBRD’s case) 64 countries and the EIB and the EU, does not need to compete with private sector banks, does not need to meet any volume criteria, but, according to its mission, should finance projects which promote the transition towards a sustainable market economy.