Prague – New investments in coal mines and power plants could cost the Western Balkans and Ukraine dearly if they fail to take into account binding rules on subsidies (State aid), according to a new briefing released today by CEE Bankwatch Network. 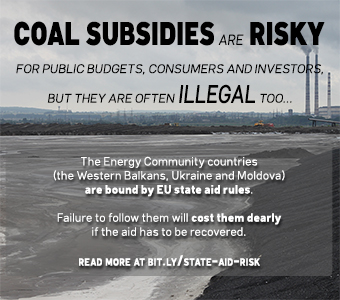 Prague – New investments in coal mines and power plants could cost the Western Balkans and Ukraine dearly if they fail to take into account binding rules on subsidies (State aid), according to a new briefing released today by CEE Bankwatch Network.

The full paper, as well as accompanying case studies and press briefing, can be downloaded from http://bit.ly/state-aid-risk

Practices such as preferential loans and guarantees, equity measures, long term contracts, and privatisation have been subject to strict rules under the Energy Community Treaty [1] since it entered into force in 2006. And yet, the signatory countries [2] are still planning new coal power plants and mines [3] without adequate attention to State aid risks. As a result, investment projects and existing facilities could face serious problems, especially if the state is forced to recover the sum of the aid granted, according to the briefing’s authors, lawyers Peter Staviczky and Phedon Nicolaides [4]. 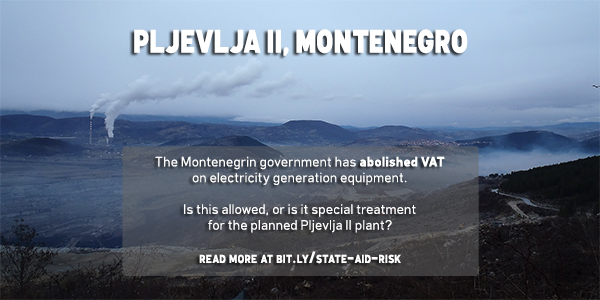 See a slideshow of cases

Among the cases examined is the controversial plan for the Kosovo C power plant in Kosovo [5], which may be supported with a 20-year long-term power purchase agreement. While such contracts reduce the risk of the plant not being able to sell its electricity at a profit, they are usually considered as interfering with competition and are thus rarely allowed.

In January this year, the Serbian parliament ratified a USD 608 million loan for the Kostolac B3 power plant [6] and the Drmno mine. For the development of the mine the state directly took a loan from the China ExIm Bank on behalf of state-owned electricity company Elektroprivreda Srbije (EPS), thus leaving EPS with no payback risks at all, and putting the company at an unjustified advantage on the market.

“South-east European governments can no longer hand out money to energy companies as they please. They need to learn the rules as soon as possible – certainly before committing to finance any more major energy projects,” said Pippa Gallop, Bankwatch’s Research Co-ordinator. “In a sector where decisions have impacts lasting several decades, energy investments are highly cost-dependent and policymakers need to take all necessary steps to ensure legal certainty. State aid issues are no exception”.

“Governments not complying with State aid law requirements face serious legal risks both at national and European level, including for decisions taken long before EU accession. In some cases they may even have to recover the aid. The Energy Community countries would do well to learn from the case of Hungary, which signed long-term power purchase agreements with power plants in the mid 1990s, but was subject to a 6-year legal procedure after EU accession in 2004 followed by several lawsuits and international arbitration tribunals. Ultimately Hungary had to calculate the difference between the market price and the price it paid for the electricity under the agreements and recover the difference, plus interest,” warned Ioana Ciuta, Bankwatch’s Energy Co-ordinator.

[1] The Energy Community Treaty entered force in 2006, with the goal of creating a common energy market between the EU and some of its neighbours. It also aims to extend the EU internal energy policy to south east Europe and the Black Sea region. This includes the obligation for member countries to implement certain EU energy and environmental legislation and renewable energy targets.

[3] For an overview of planned coal power plants in the Balkans, see https://bankwatch.org/campaign/coal .

New coal power plants are also planned in Ukraine, but due to the revision of the country’s energy strategy and the political situation, the plans are currently unclear.

[4] Péter Staviczky studied law at the Pázmány Péter Catholic University Faculty of Law and Comparative Law at the International Faculty of the University Robert Schuman Strasbourg. He did a banking-lawyer postgraduate training and took part in the common European specialist course of the Ministry of Foreign Affairs and the French École National d’Administration. He has been working at the State Aid Monitoring Office in Budapest since 2001. In 2007, he was appointed as head of the unit. He is a regular speaker at the seminars on State aid. Since January 2011 he is the attaché responsible for State aid at the Permanent Representation of Hungary to the EU in Brussels.

Professor Phedon Nicolaides holds the Jan Tinbergen Chair for European Economics at the College of Europe. He is also Professor at Maastricht University and holds a PhD in economics and a PhD in law. His research interests are European integration, competition policy and state aid, and policy implementation and he has published extensively on these subjects.